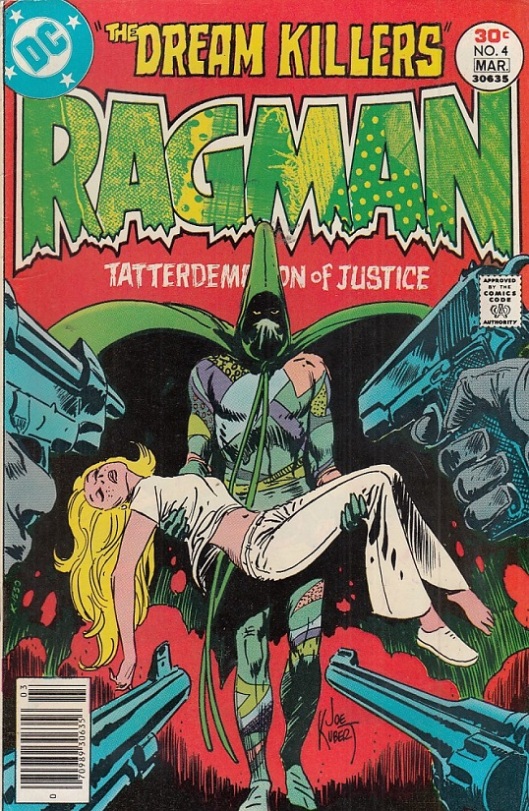 Underneath a beautiful cover by the one and only Joe Kubert, Robert Kanigher and The Redondo Studio begin things on an almost lyrical, though tragic note. Readers are introduced to a young girl who has overdosed on drugs and is soon to be dumped off of a bridge by those responsible. Thankfully Ragman intervenes and though he is far too late to have prevented her death he can at least save her body from being despoiled, giving those who love her a little closure. What follows is a tale where the police can do nothing about the rash of kids who are overdosing throughout the city as they have no idea how the drugs are getting through their blockades. Ragman in his civilian identity of Rory Regan takes a number of kids including Teddy whom he saved last issue to the fair, a place catering to the innocent of society. It is there though, that things not so innocent in nature come to light and the drugs that have been infecting the youth of the city are soon intercepted by none other than the ‘Tatterdemalion of Justice’, Ragman. In a second tale by Kanigher and illustrated by Kubert, a group of grave robbers looking to make a score find more than they are looking for when they encounter a figure in the shadows amongst the tombstones, a man covered in rags. Like the previous books in the series, this fourth issue is expertly written with just the perfect amount of melodrama balanced with a fair amount of action, making for a very enjoyable read. The first story about drugs facing the youth of the day still holds true currently and thus lands more of an impact than if it was a story about a costumed villain or common criminal while the second is powerful in its silence. Rory continues to be a good man through and through, a hero to many both in and out of costume which is good to see, something that is sometimes not stressed enough with the more famous of costumed heroes. As always, the artwork is top-notch and altogether, this second-to-last issue of Ragman’s first series is a great read.