Here is a list of favourite comics that were released throughout the year in 2019, by no means complete and by no means a best-of list – just books that were enjoyable and a lot of fun.  From Marvel who definitely had the most output given any publisher, there were quite a few books that ended up being quite good. 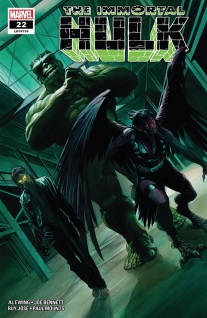 Despite the endless events and crossovers, there were those that turned out to be not too bad and Absolute Carnage along with War of the Realms tops the list (only counting the main book and the Venom title tie-in when it comes to the former and the main book and Thor tie-in for the latter). They had a lot of books that would spin-off and so forth for the both of them to varying degrees of good and bad, but for the money, it was the main storyline where the best meat could be found. Donny Cates would start to unveil his five-year plan for Venom and Jason Aaron would begin to wrap up his hundred-issue long stint on the Thunder God and readers could not help but be excited by the both of them.

While speaking of those authors, Thor and King Thor by the aforementioned Aaron would continue to be one of the best books released by Marvel in 2019, the God of Thunder becoming what he was always meant to become while Guardians of the Galaxy and Silver Surfer: Black would cement Cates as the next great cosmic scribe after Abnett and Lanning.

Immortal Hulk continues to chug along and while that does not necessarily sound very good, it is one of Marvel’s very best, if not their very best book being published month in and month out.

One does not hear too much about The Invaders or Old Man Quill, but they are two very solid books that were fun for very different reasons and now that both are done and over, picking up the collections or back issues is a must if looking for a good read.

Last but not least from The House of Ideas are the various X-Men books by Jonathan Hickman and a plethora of creators. From House of X and Powers of X to 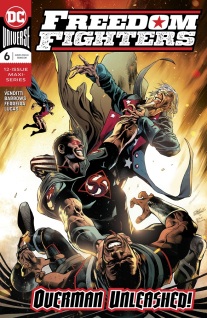 the titles that would spinoff from them, Hickman would finally bring the X-books screaming into the present day with powerful storytelling and modern concepts, something absent from the books for the last decade or so. That is not to say there has not been the occasional good story before Hickman, but they have essentially been floundering for years and now they have a purpose and are, to put it lightly, exciting.

When it comes to DC, it would not be any of their big books that would provide the entertainment one would expect, but titles that could be classed as second-tier. Shazam!, even with all of its delays, would end up being far more enjoyable than anything from the Superman line (Superman Smashes the Klan an exception) and Far Sector about a Green Lantern on the edge of the universe, far more intriguing and entertaining than anything from the Bat-books.

Freedom Fighters by Robert Venditti would give readers yet another fresh look at the characters and it turned out to be a truly excellent title with a bit of classic flair, presented with modern sensibilities and all-out action. No matter the week it was released in, it rose to the top of the read pile beating out every other book from the publisher.

Another surprisingly great title from DC would be the continuing Hawkman, also by Venditti who would fix all the incongruities that surrounded the character to make for a very compelling and exciting read. One of DC’s best books that needs to be seen by more readers than it is.

Finally, with a new line of horror titles by Joe Hill, they would take the place of the dearly departed Vertigo with books like A Basketful of Heads, Dollhouse and 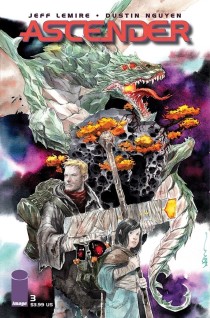 The Low Low Woods, comics one would not really expect to see from DC. So far, they have been a lot of fun being spooky and suspenseful and even slightly humorous in a twisted sort of way. If DC keeps taking chances on titles such as these, they may end up being a force to be reckoned with yet again.

There are no shortage of comics to be had from multitudes of publishers aside from the Big Two and here are some more that are worth checking out:

Red Sonja, much like many Dynamite properties over the years, has had a lot of reboots and titles to call its own and yet the current one by Mark Russell is probably the smartest and the most enjoyable to come along in a very long time.

Though it began in 2018, Bone Parish by Cullen Bunn was a tense read and despite what felt like a rushed ending, it would be one of the man’s best releases during the calendar year of 2019.

What is there to say about Criminal by Ed Brubaker and Sean Phillips that has not been said in the past? A great book through and through.

Ascender by Jeff Lemire and Dustin Nguyen picks up many years after the events of Descender with some familiar characters returning and featuring a storyline that would see magic in the universe reign supreme and technology essentially being forboden.

The Lollipop Kids started in 2018 but finished in 2019 and was definitely much too short. Featuring a story of magic and monsters, legacy and Central Park it was

incredibly enjoyable and is a title that needs to return.

With only three issues under its belt, The Marked is a fun book mixing magic and tattoos that looks like it could end up being something epic if developed right.

Once and Future is a great take on Arthurian legend taking place in present-day by Kieron Gillen and Dan Mora, a book that has started gravitating towards the top of the read pile with every successive issue.

Another book that needs mentioning is Archie which continues to be written and drawn extremely well providing that slice of life, fictionalized source of teenage drama and humour that it has become known for over the last few years, still a great read and still a lot of fun.

Altogether, there were hundreds of titles released during the past calendar year vying for everyone’s money and while not everything appeals to everyone, there was such a plethora of books and genres present that there was at least something somebody would enjoy on the racks at any given time.