For a movie that was made for television, Dark Night of the Scarecrow is a perfect example of horror done right. It might not have had the visceral type of horror that many of the movies during this time period had, with very little blood and all of the murders taking place off-screen, but what it had was more in common with those 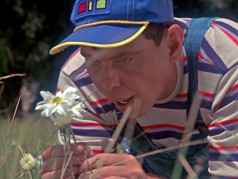 horror films made forty years previous. Specifically, the picture had a very strong and memorable villain as portrayed by Charles Durning who could stand along any of moviedom’s great monsters.

There is a fair amount of horror present throughout the film and while one would normally think that it would come from the scarecrow so named in the title of the movie, and to be fair some children might find it frightening, it is the actions of four men and one of them in particular that really perpetuates that horror. It all comes about when a mentally handicapped man named Bubba as played by Larry Drake is blamed for the death of a little girl. The local mailman named Otis gathers together three like-minded men and the posse heads out to take care of Bubba once and for all. They find poor Bubba dressed up 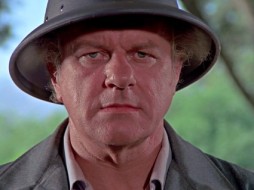 pretending to be a scarecrow in the fields, after which they pour twenty-one bullets into him. Put on trial for murder after discovering that Bubba was actually innocent, they are soon set free and a supernatural force returns in the form of a scarecrow to exact revenge upon them.

While the entire cast is fairly exceptional from Drake as the brunt of a small town’s hate to Tonya Crowe as the incredible Marylee who seems to know more than she lets on, it is Durning that steals the show and whom the audience latches on

to. As the man responsible for the atrocity that takes place, he begins as a character easy to dislike until the end of the picture where seeing him dead is the only thing that will satisfy. Otis goes from a man full of hate to one who is almost manic by the conclusion of the film, a person obsessed with keeping his crime covered up by committing more and as he does so, he only sinks deeper into his sickness. As for the scarecrow – whether it is Bubba or something else entirely, it gets its closure while Otis gets what is coming to him.

With a spine-tingling atmosphere that makes itself known right from the first and one filled with an understated, yet growing menace, Dark Night of the Scarecrow shocks the viewer on more than one occasion and the audience cannot help but be absorbed into this very disturbing tale.