For a lot of the horror/comedy hybrids that came out of the eighties, there are few that hold up as being actually funny and aside from a line or two in this film, Doom Asylum can be added to that list. 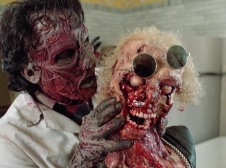 The problem with such humour is that it ends up being dated and what was funny in 1987 is not necessarily funny now. While there are no specific cultural references of the time that would indeed date this movie, it has a different problem that kills the humour – bad dialogue and jokes bereft of mirth or cleverness. If writer Rick Marx had just gone for straight-up horror, the picture could have been quite spooky what with it taking place in an abandoned asylum and yet, he instead sucked anything that might have been frightening out of the picture by trying to make it humourous. There is horror present in the form of a crazed maniac with rotting flesh and a highly gruesome face hunting down and killing everyone who happens to be in said asylum and doing so in grisly fashion. It is all

quite morbid and horrific in nature, but at no time was there any suspense or tension leading up to said murders nor were any of them the least bit scary.

Made for little more than a shoestring, director Richard Friedman does a good job at moving things along for the most part and the special effects were fairly decent, the big bad looking as though he had just been through a meat grinder and his victims fairing little better. There is a bit of ridiculousness present, some of it taking the form of the punk band and the awful one-liners that the killer spouts, not to mention Patty Mullen’s character calling her maybe-boyfriend ‘mother’ and it all adds a real visible layer of cheese to the proceedings.

For a B movie, Doom Asylum is not the worst one will ever see and sports everything that audiences want out of a silly film like this one. Every cliché is present and no matter how bad it gets or how ludicrous, it still manages to be a fun watch all the same.