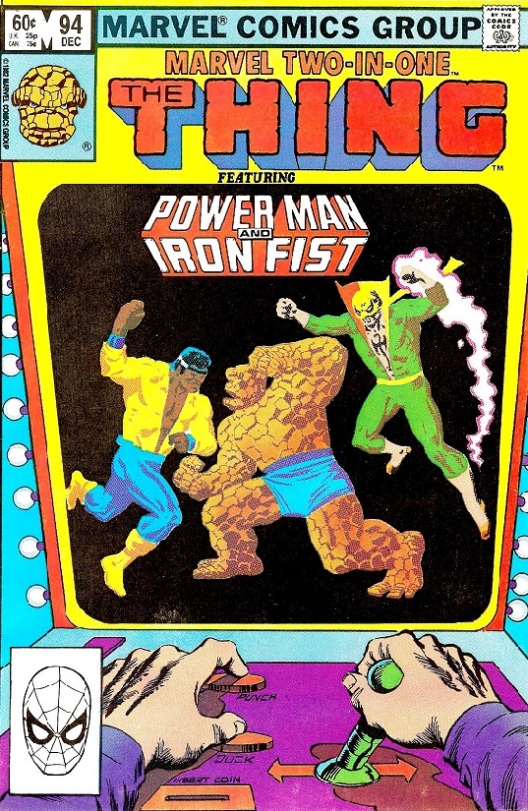 Alicia Masters is an independent woman and despite The Thing always worrying about her going off and doing things alone, he cannot always be there. On this day, she is attacked by some hoodlums and just when things are about to turn really dark, an unexpected hero emerges and helps her out. It is not long before Alicia learns that the person who rescued her is Jeff Man and that a group of evil men have taken over his company and he is being forced to work for them, making him paranoid and forced to live on the streets in order to get away from them. Ben vows to help the guy out, but Mann is also the subject of two other heroes interest, that being Power Man and Iron Fist. For the latter two, they have been hired to find Mann by the very company he wishes to escape from and eventually, when he is discovered and all of the heroes meet up, it comes to blows as these things often do. David Anthony Kraft writes a fun story with some good banter between Luke and Danny, not to mention the usual glibness and deadpan delivery that Ben displays when it comes to beating up on someone. This time around it is Power Man that Ben has a tussle with and while Luke thought it would be an easy fight, he is definitely amazed at just how powerful The Thing actually is. It comes as no surprise that all of the heroes make up and play nice when they realize that Mann was correct about those that hired Danny and Luke and not long after when the fight is taken to them instead of each other. For the most part, while the book was enjoyable on the whole, it was pretty unremarkable. It was not a part of any longer storyline, nor would it make an impact on our heroes lives in any way, shape or form, not that every story must do so. Short, sweet and a nice filler issue of one of Marvel’s best titles.