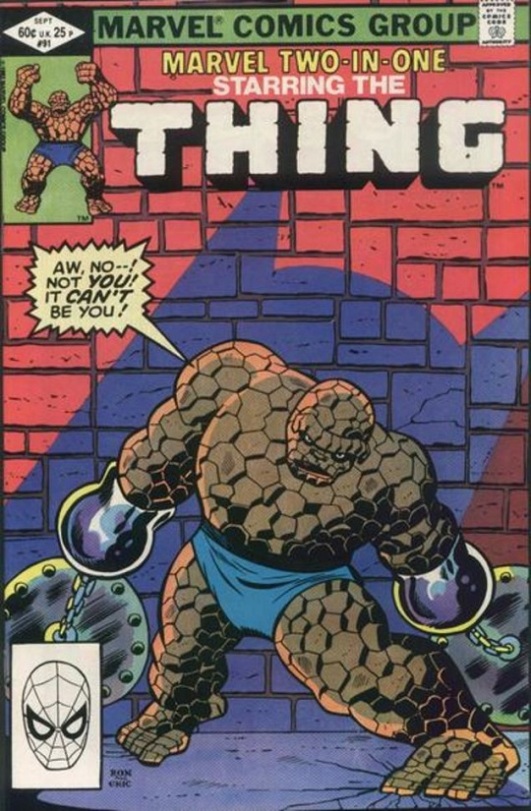 The cover to this issue of Marvel Two-In-One does not give the reader any hints as to who might be co-starring with The Thing and as far as anyone can tell, it could be Batman. While that would have been quite the incredible surprise, it is not a hero that appears but a villain and when Doctor Strange shows up and tells him of a threat emerging in Egypt and that Ben is somehow going to be involved with it, he scoffs at it. Of course, as he has no intentions of going over there, Ben does what he can not to do so but Tom DeFalco gives readers just that as the rocky hero feels a tugging inside of him, an urge to go to Egypt for whatever reason. Upon his arrival he is warned somewhat of what lies in store, but it takes getting captured to reveal the villain of the picture and it is none other than the Sphinx whom the Fantastic Four have tussled with before. It is here for the reader’s benefit that DeFalco aided by the great Ron Wilson go into the Sphinx’s background and history, telling his origin from when he was a simple magician and being exiled from the Pharaoh’s court, to finding the Ka Stone and gaining immortal life. For the Sphinx, he makes it sound tragic, losing loved ones and watching time pass him by in a never-ending number of years, eventually recounting his battle with the Fantastic Four and Galactus. The Thing is not impressed and does not feel sorry for the man whatsoever and he soon learns why it is that the Sphinx is here and now which is to gather the fragments of the Ka Stone that Galactus crushed in order that he might gain his powers back. While the Sphinx might have hated the immortality in one respect, he also cannot seem to be without the stone and as he leaves Ben to finish the task of restoring it, Ben breaks free of the chains that have been holding him back so that he might stop the villain before he regains that which was lost. Overall, one cannot say that this was the most exciting issue of the series as there was little action and most of it simply served as a re-cap to the villain’s past. It was interesting and it read well, but a little more fisticuffs from the two would have been nice to see.