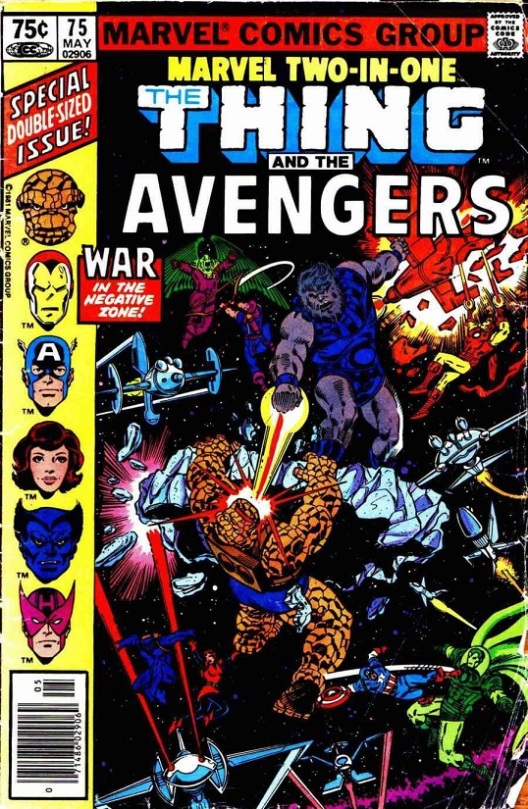 For the big seventy-fifth issue of the series, Tom DeFalco jumps on board to scribe the adventures of The Thing and it finds the hero once again running a poker night. Like those in the past, it of course decides to take a turn for the worse and is interrupted by an alert from the Negative Zone, meaning that there is trouble. Thankfully, the Avengers are on hand to join him in whatever an investigation might bring them, more than likely being nothing good. All the while this was going on Annihilus is looking to continue his war on life and who just so happens to show up but Blastaar, looking for both a little revenge and a little power. He offers to serve up his home planet to Annihilus in exchange for a bit of revenge and in return, he will also join Annihilus in his quest to rain death down upon the Negative Zone, the likes of which has never been seen before. So it is that eventually, the two sides come into contact, the reason being a distress call sent out by the lost love of Blastaar who ends up not being long for the mortal coil when her treachery is found out. In addition to this, DeFalco brings in the Super-Adaptoid whom Annihilus has found floating out in space and while the Avengers and Ben might have stood a chance against the two villains on their own, they could not have expected this as Annihilus has no qualms in using it. Bringing this tale to life is Alan Kupperberg who has a lot on his plate in this extra-sized issue, but as it is the man handles it like a pro and the book looks incredible. DeFalco meanwhile does not take it easy on the heroes as they are beaten back, some of them taken prisoner while others are left for dead. So it is that when the chips are down and it looks like things might be heading towards a finality there is no returning from, they rally back, partly because of The Thing and surprisingly, thanks in part to Blastaar who saves a few of them from Annihilus’ arena. There is a lot of drama to be had and more than enough action for the die-hard fan and all of it reads at a good pace, all of it balanced perfectly by the creative team. Come the end of the book, there is a bit of a surprise as Annihilus, who had thought that he had it all under control, did not in fact count on one thing and that was betrayal. As far as standalone issues go in this series, this was definitely one of the better ones to be had as it had something for everyone to enjoy.