Another Castle, Another Madman – Castle of the Creeping Flesh (1968)

Castle of the Creeping Flesh is a strange beast of a film, though it ultimately becomes about one man trying to save his daughter from the finality of death. Suffice it to say, when factoring

in a sex-crazed Baron, a fair amount of nudity and violence, rape, graphic surgery and a bear and the film has everything but the kitchen sink.

Altogether, one has to know that this movie is far more ridiculous than the above description and yet for whatever reason, filmmaker Adrian Hoven manages to tie it all together in an inept, yet maniacal and gleefully crazed narrative that its audience cannot help but watch from start to finish. Because of all of this, the movie ends up being quite funny, though it has to be unintentional as the subject matter is not something one would normally laugh at. Whether it be the inordinate amount of topless women, the truly awful dubbing which might be the worst ever captured on film, the long, drawn-out heart surgery or the meandering mess of it all, the picture is hilariously bad. Such as it is though, there is some striking imagery to be found within and 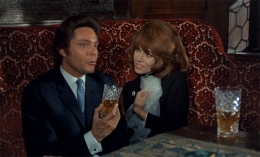 the set design within the castle is quite good. On the flip-side, the acting was fairly atrocious including that of Howard Vernon whom many will recognise from a plethora of Jess Franco films, though out of everyone, he was perhaps the best of the lot. As for the story, that main plot thread dealing with the Earl trying to save his daughter, it might not be wholly original and it has been seen before, but it always makes for a good one as it is something that the everyday person can relate to, minus the mad scientist bit. With a little more focus, Hoven might have crafted a masterpiece and while he did end up making this a cult film, it is not as widely known as it could have been due to it turning out the way that it did.

Ultimately, the movie which is a mixture of horror, sleaze and exploitation, not to mention a touch of science-fiction where it comes to the restoration of life through surgery, Castle of the Creeping Flesh or Im Schloß der blutigen Begierde is a movie that has to be seen to be believed. It might also be one of the worst films that one could ever watch, but it is interesting simply for that fact alone.