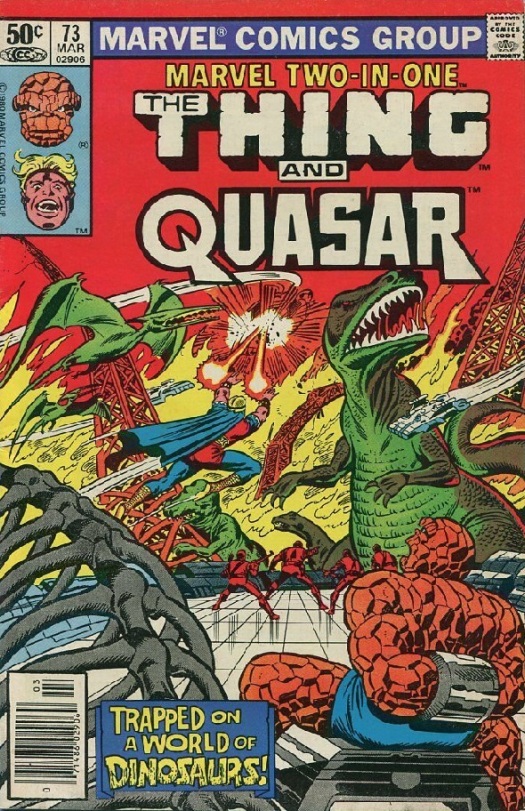 When this issue opens, it does so with The Thing and Quasar finding themselves on another planet, the story of which is told in flashback and suffice it to say, the two men are as confused about it just as much as the local natives. It is not long before the pair are being attacked by strange ships and foreign soil or not, the two men work well together, having fought more than a few battles in the defence of Project Pegasus. Ralph Macchio and Ron Wilson come together to chronicle this titanic tale and they do so in a very thrilling manner and while the two heroes fight for their lives, it matters little as the two are soon overwhelmed. It is here that Macchio sets the two on different paths, though when it comes to the final act, they will meet again. As it is though, Quasar meets the locals and The Thing is taken prisoner. The former learns what has transpired on this planet, of the men who look to exploit the natives for their resources and use them as slave labour while the latter comes face to face with the man behind it all – Bennett Pittman of Roxxon and Nth Command, the man behind all of the travails that have affected Project Pegasus of late. Ben is not happy about learning who this person is and just who it is he thinks he is and The Thing is definitely not happy about being taken prisoner – something that the men around him are soon to find out. While things temporarily took a slower pace for the second act, they soon pick right back up as The Thing escapes and looks for a little payback while Quasar has teamed up with Chief Tonah and his men along with a herd of dinosaurs to attack the oil wells that Roxxon has set up on the planet. The destruction, as one can imagine, is immense – the steel structures of Roxxon not being able to stand against such a horde. As for Pittman, he escapes back to Earth and thinks himself safe, though he does not count on the tenacity, nor the intelligence of his foes. It is not long before The Thing and Quasar end the drilling operations on the alien planet they have found themselves on, they also put a stop to Pittman and Nth command permanently while Macchio wraps up a very long-running plot line. Altogether, this was a truly fun story with everything one could want in an issue of Marvel Two-In-One, not to mention some exceptional artwork from Wilson and Chic Stone.