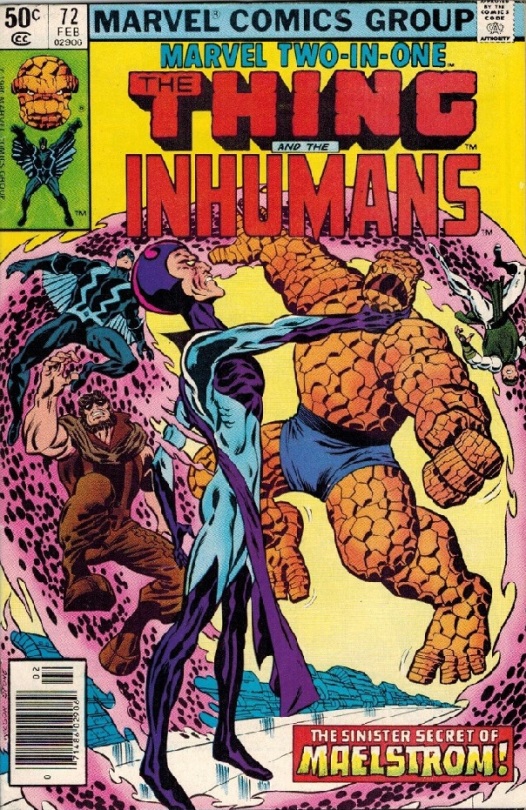 Once upon a time there was a scientist named Phaeder who was exiled from the city of Attilan. Now, many years later, his son Maelstrom vows revenge upon the Inhumans and thus is revealed as the villain whose minions had stolen the cure to Terrigenesis that Reed had created. Creating such a cure is a little controversial yet Mark Gruenwald and Ralph Macchio have decided to continue with that particular plot device and as such, in the wrong hands it could become a weapon which is exactly what Maelstrom intends to use it as. As for those that follow him, they have failed in their task and so he sends Deathurge out to take care of them and it is an ending that they do not walk away from. As for The Thing, he is joined by Karnak and Gorgon to the site of old Attilan as Reed has deduced that it is there that Maelstrom must be. Reed also informs Black Bolt of all he has discovered and when hearing of this, the Inhuman king rushes to meet the heroes for they know not what they walk into. Joining Gruenwald and Macchio for this excursion under the waves is Ron Wilson and the man’s artwork is as good as ever, the action on the page coming to life in exciting fashion. It is also quite interesting to look back at a page from the Inhumans’ past, even if it is from the villain’s viewpoint. Suffice it to say, the bad guys are bad and Black Bolt arrives just in time to save Ben and his people before anything can happen to them that would have prevented as such. Maelstrom though, is not a one-trick pony and he fires a missile off with the anti-Terrigen Mists that he had stolen and he has aimed it straight for the heart of Attilan. That calls Black Bolt away leaving Ben and his compatriots to deal with the current threat. The Thing takes care of business as only he can and the threat of Maelstrom and all he represents is buried, literally, to threaten no more. While all seems well that ends well, there is every possibility that Maelstrom survived, not to mention Deathurge. There is also the question of the cure that Reed Richards has created, which for the moment is being put to good use by solving the problem of those turned against their will by the Terrigen Mists, but it does nothing to address the future and what disaster it could make. Definitely a fun issue with some great action, mixed with a bit of tension and a good dose of suspense.