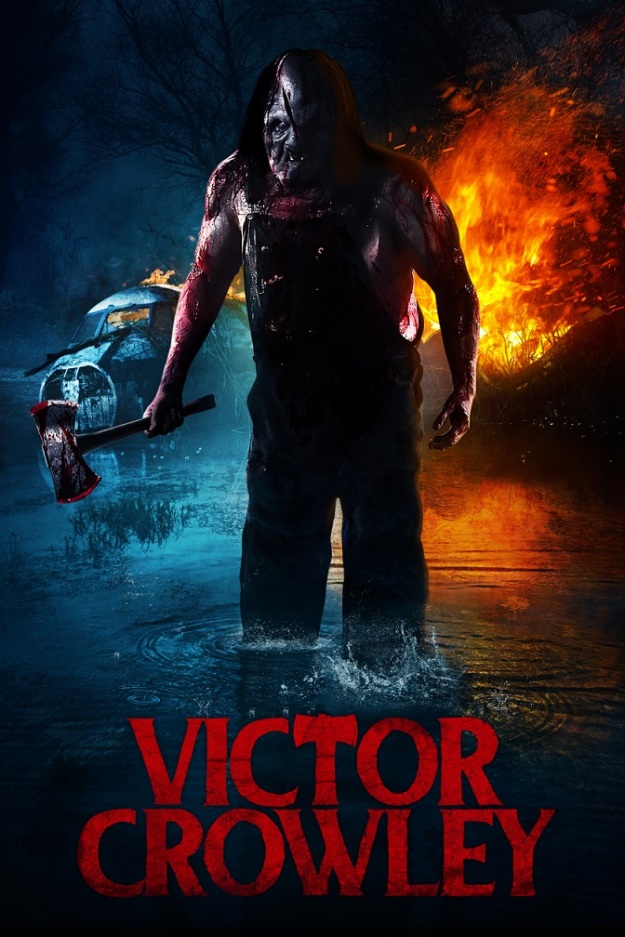 Adam Green and his creation Victor Crowley return in a self-titled film, the fourth in the series and it finds the creature back from the dead and as murderous as ever. With Honey Island Swamp now being a tourist destination ever since the monster’s demise a few years previous, people have become complacent in his absence. All of that changes when a downed plane

becomes the subject of Crowley’s more violent proclivities with almost all of the passengers meeting their doom.

Not only does this movie mark the return of Green behind the director’s chair, it also features one of only two survivors to make it out of Hatchet III – Andrew Yong as played by Parry Shen and what is great to see is that he is not only just a bit of the comedic relief in this film, but he has transitioned into the role of leading man and is treated as such with a more serious eye than previous characters he has played in the series. Also back is the one and only Kane Hodder as Crowley respectively and he plays the villain with a zeal that is quite refreshing, almost like he has come back from the dead as well. The film is exceptionally gory which has become one of the hallmarks of the series and it is nice

to see that some things when it comes to this franchise never change. In Green’s case, that means having fun with his main character and getting back to what made the films so good in the first place, that bit of camp and humour mixed with gallons of blood. Green takes this one all the way back to the beginning, showing Crowley killing a young couple decades previous and establishing a little more history to the mythos while also modernizing the film a little in a scene where a YouTube video is responsible for resurrecting the creature with a very tiny cameo by Tony Todd. There was almost nothing to complain about, except perhaps the setting which could have moved on from the plane at one point, but otherwise Crowley and Green have returned in fine form.

Where the previous films, namely the first two would end on a cliff-hanger and each leading into the other, this one ends with Crowley’s supposed death, much like the third. Unlike those aforementioned films, this one would feature a mid-credits scene featuring the return of a certain character who was teased at the end of Hatchet III and which quite possibly, may herald a fifth entry of the series. One can only hope.