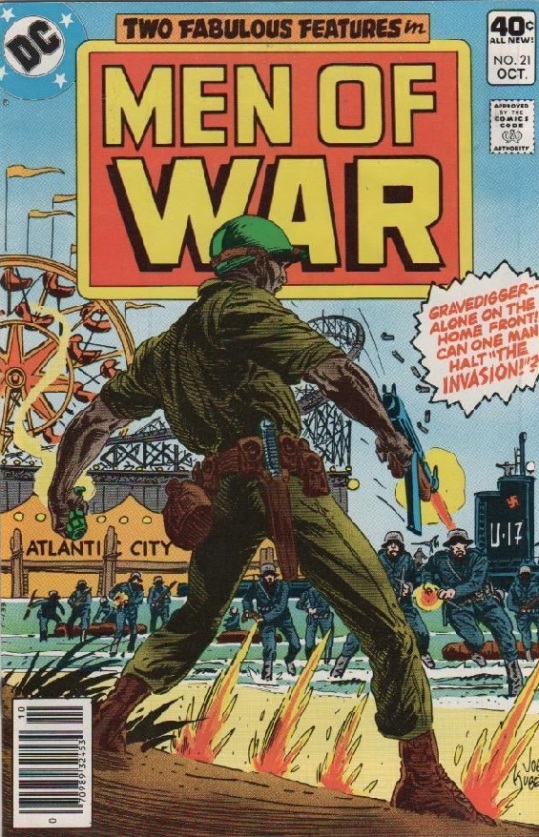 The book begins with a demonstration of the army’s newest canon, one more technologically advanced than what they have now, but with Hazard needing to see the top brass, meaning Major Birch, he needs to go through the test area and bypass the weapon. So Hazard does just that, proving that not only does the area’s security need beefing up, but the weapon is not all it was cracked up to be. With this issue, Jack C. Harris and Dick Ayers do something a little different and they let Ulysses go on leave after he receives a note from his best friend stating that his mother is on her deathbed. Birch, knowing that a distracted soldier is no good, lets Hazard go but upon arriving home, Ulysses’ mother seems to be fine. So it is that it all turns out to be a ruse from the Germans and their latest plan which turns out to be an invasion on two fronts and the first involves Nazi agents taking the place of key Americans so that when the time comes, they can let the German forces into the country. As it turns out, it is all the master plan of Goebbels and as a test, he means to eliminate Hazard. Thankfully Ulysses is not an easy man to kill and though it looks like it might be close at times, he manages to save the day, stop the German forces from closing in, yet still has to bury his friend at the end of the day as the casualties of war come far too close to home. In the second story of the book, Dateline: Frontline returns and it finds Wayne Clifford heading to the naval front lines in Russia. Things of course do not manage to go as smoothly as he would have hoped as the British ship he is on is attacked by German U-boats. While the crew struggles to keep the ship afloat and simultaneously trying to take out the U-boats, Clifford can do nothing but sit back and try not to die. At one point, there is a moment where Clifford – though neutral in the war – decides that the least he can do is aid the British and himself in staying alive and so mans one of the guns. When all is said and done, the good guys come out on top, but their vessel is beyond saving and just when it looks like that might be for the lot of them a Russian ship arrives to save them all, while relieving them of their supplies – food and various goods being hard to come by in the country at the moment. This was a spectacular tale that grabs the reader by the throat with some great sea-action and even better artwork by Jerry Grandenetti. Altogether a fantastic issue from the first page to the last, presenting two very different, but very good stories.