There is little to say about Trancers 5: Sudden Deth that has not already been said about Trancers 4: Jack of Swords because they are essentially the same movie. The plot is slightly different, but everyone from director David Nutter to the cast, the producers, the cinematographer and so on are all the same. What it looks like, if one were to subtract the credits from 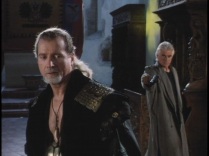 both films and the recap from this one is that the two were originally one film and Full Moon simply decided to split it in two in order to maximise profits. It was not necessarily a bad idea if the material had been good enough to do so, but as it turned out; the films are not all that great.

The story still finds Jack Deth on the world of Orpheus, stuck in another dimension where science essentially took the back-burner to magic and where Trancers are in power. By the end of the film, Jack eventually finds his way home and he brings Trancer Prospero along for the ride.

Altogether, the Trancers franchise is split quite definitively with the first three films representing a trilogy of sorts while the fourth and fifth a duology, each separate from the other and only tied together by the main character. The initial three movies are excellent, the latter two not quite so much and the sixth something else entirely. Not worth the time unless the fourth and fifth films are all that is on the agenda.