Night Train to Munich is a World War II thriller released in 1940 that takes place just as the war is breaking out and the lines between Ally and enemy are just being drawn. It begins with a scientist in Czechoslovakia escaping as the German forces start to move in and his daughter being captured. What follows is a tale of spies, one from Germany as played by Paul Henreid

and one from Britain starring Rex Harrison with Margaret Lockwood caught in the middle and Germany about to go to war with the entire world.

Lockwood stars as Anna, daughter of Axel Bomasch as played by James Harcourt and who is put in a concentration camp when he escapes to Britain. From there the pace picks up as she is on the run to England and viewers are made to realise that not everything is as it seems. Directed by Carol Reed, the man creates a film that paints the tense atmosphere of those first few days of the war quite well, where people still travelled freely throughout Germany somewhat, yet a country where the Reich was taking hold with an iron fist. It is here that most of the action takes place as Anna, who thought she had escaped and found her father in a very safe Britain, almost loses hope until Randall shows up undercover as a German major in the hopes of getting the Bomasch family out. As the two spies face off against each other both psychologically and physically, it all culminates on top of a mountain where Switzerland lies just a tram ride away and where both know that only one will come out on top. 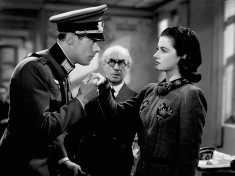 While the film is highly dramatic and packed with suspense, Reed manages to insert a bit of comedy here and there thanks to Harrison and in the latter half of the film, Naunton Wayne and Basil Radford. It lightens the film just enough from becoming too dark even though the Second World War was not exactly a time where laughs were overly prevalent. Out of everyone, it would be Harrison that would keep viewers hooked – charming, suave and smooth whether undercover or not. Henreid was excellent as well, making the audience hate his character for being so duplicitous, not including the fact that he is a Nazi. Reed’s direction might be tight and highly effective in selling this movie, but the performances from its cast were no less compelling and the film draws in its audience from start to finish.

In 1940, with the Second World War only a year old, films about it were not as common as they would be in the coming years making Night Train to Munich one of the first and as the years would pass, remaining one of the best.