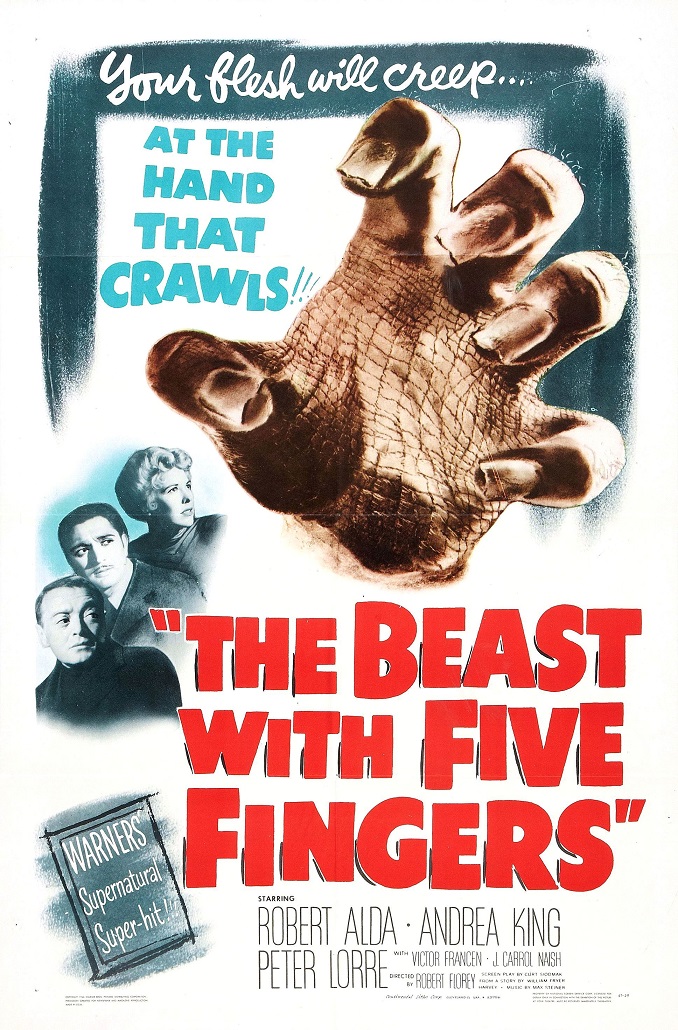 Though the poster essentially gives away the eponymous beast, the film still manages to engage and delight the viewer until it rears its very unorthodox head. It all begins benignly enough, but soon director Robert Florey takes his audience on a trip both into the mysterious and into madness.

The story itself deals with an old man named Francis Ingram whom people cling to in one fashion or another, some friends while others being employed. When he makes a new will one night and leaves everything to his young, blonde nurse as played by Andrea King, it of course causes a little bit of tension and it is not long after that Ingram is found dead. As is always the case, money brings all sorts of characters to the table and of course, it also brings out the worst in some of them as well. Soon, there are bodies turning up dead, all it seems, murdered by Ingram’s severed hand, somehow alive and looking for vengeance against those who would go against his wishes in life.

Starring Robert Alda in the lead role with King co-starring, it is Peter Lorre who steals the show as meek astrologer/servant/friend Hilary Cummins. At first Lorre is simply part of the background, blending in like a piece of furniture, but it is not too long before his incredible screen presence comes to bear and from that moment on, the rest of the cast never had a chance. While Lorre is eventually turned out as the villain of the piece, one has to feel a little sympathetic for the man, with him also being a victim of sorts, both to his passions and his obvious 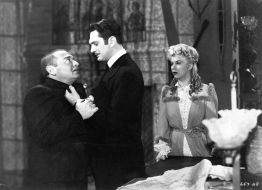 insanity. Lorre’s character, while mad, is also a complex one, a man introduced as one content with his books – quiet and reserved, though a little obsessive. When he starts to emerge from his shell though, it is hard to peg him as the villain as he could simply be outraged at the lot he was given in the final will that Ingram made, especially considering his years of service. Be that as it may, things deteriorate fast in the house with each and every murder and Cummins becoming increasingly unhinged.

Florey creates a very moody masterpiece, the house painted in shadows, doubt and fear and each of his players having something to gain whether it is Alda’s character Bruce Conrad – a grifter in his own right, nurse Julie Holden, Cummins or the relatives who show up once Ingram has passed away. Everyone is a suspect including Ingram himself whose hand, the titular beast, is somehow alive and tormenting those within the mansion.

The Beast With Five Fingers is an eerie film, part creature-feature and part psychological horror, but all of it an experience that fans of the genre definitely need to see at some point in their lives, if only for Lorre’s masterful performance.