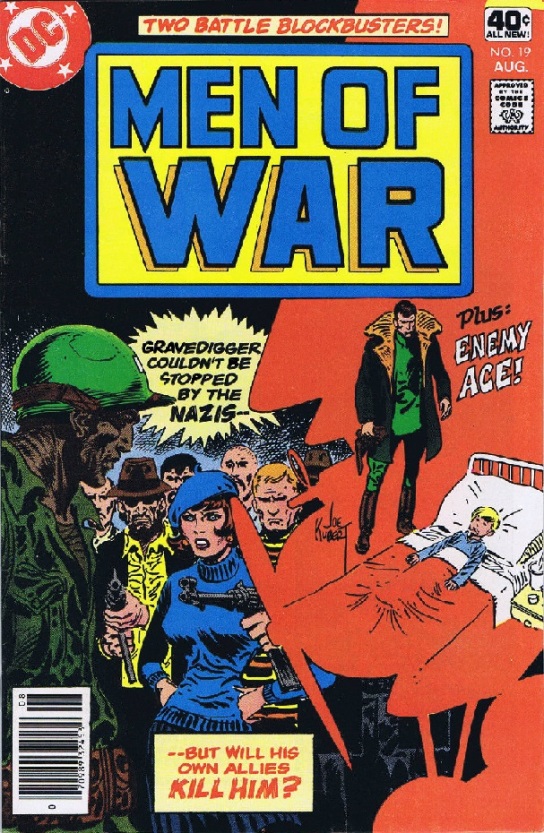 Ulysses Hazard, the man known as Gravedigger, has rescued Dr. Noire and now all that remains is getting him out of occupied France. The trip is a dangerous one as the Nazis are on their tail, but with the help of the French resistance and the woman named Marie, it may just happen faster than expected. Writer Jack C. Harris, the man who has been chronicling the adventures of Hazard from the start is not one to take it easy on his hero and so the Nazis manage to not only catch up to Hazard and the resistance, they also have a traitor on the inside, a man who has been conspiring against them and sabotaging their efforts. Thankfully, it does not take long for Ulysses to ferret out the truth and when all is said and done, he may have just gained a friend in the process. In the second feature in a story by Robert Kanigher and starring Enemy Ace no less, the man is called to the beside of a little boy who has accepted death. The Baron is someone whom the doctor thought would be able to shake the child out of the deep depression he is in, a malady that has stricken him ever since the day his father had died and a man that Von Hammer used to know. So it is that the Baron relates a story to the young boy of how brave and honourable his father was and when the tale is through, it does next to nothing and the child remains as he was. Von Hammer can think of only one thing that might get through to the child and that is to find his friend’s murderer and bring him to justice the only way he knows how – in the skies. Thinking that and making it a realisation is another thing altogether and the Baron just might have bitten off more than he can chew. Men of War #19 is yet another fantastic issue featuring not only the great writing talents of Harris and Kanigher, but the incredible artistic teams of Dick Ayers and Romeo Tanghal and Howard Chaykin. The latter two continue to bring Hazard’s adventures to life and make each and every story an exciting one while Chaykin continues to make the latest tales of the Bloody Red Baron things of beauty, each one better than the last. The series continues to be a fantastic read and it finds its characters, especially that of Hazard, becoming far more interesting with every issue and a series that everyone should pick up.