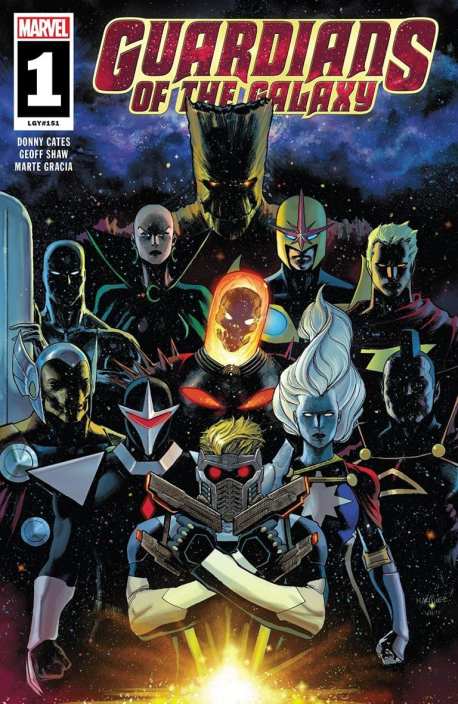 The Story – Thanos is dead, the Guardians are dead. Long live the new Guardians of the Galaxy.

The Take – The newest incarnation of the Guardians of the Galaxy is essentially a fresh start beginning at the tail end of the latest Infinity event and hopefully the last to appear at least for a few years. Written by Donny Cates with artwork by Geoff Shaw, it sees the Guardians broken up, all of that to be found in the aforementioned event and the cover of this book which depicts an entirely different team, and Thanos lying dead. With a congregation featuring a who’s who of the Marvel Cosmic Universe, minus the heroes of Earth as explained by Starfox, they have gathered to make sure that the Mad Titan is indeed dead and to hear the monster’s last words. After their recitation, a plan by the Mad God is put into motion and it takes very little time for those gathered to start scheming and blaming and looking for the ‘new’ Thanos – someone whom upon Thanos’ death would inherit his digital memories and take over where he left off. While that causes some chaos, the cosmic races and personages assembled find themselves under attack from the Black Order who are looking to abscond with the body of their former master and they do so in the severed head, come city of the Celestial once called Knowhere, now active and serving as their base. Elsewhere, Peter Quill and Groot, the last two members of the Guardians who discover that Knowhere is missing, end up rescuing some strays from a lifeline anchored by none other than Beta Ray Bill’s hammer and after doing so, declare them the new Guardians of the Galaxy in order to avoid a bit of an uncomfortable situation by the Nova Corps. Altogether, Cates writes a really run story with a little heavy drama, some spectacular action and a great cliff-hanger with quite the surprise to leave it all off on. Shaw does a fantastic job drawing it all and the book really comes alive thanks to the pencils he puts down. The new team make-up, which may or may not be finalised as of yet is both interesting and fresh and should make for some great stories going forward. As for the former Guardians, they are sure to make a return at some point down the road, but for now, it is nice to see something a little different in the title and is just what the book needs to keep it from getting stale. For a first issue, it does everything right and is definitely worth the money for those who might be hemming and hawing over yet another reboot.