Amid a gluttonous amount of networks and emerging streaming services, it makes it almost impossible to choose something to watch and get invested in due to the amount of variety available. Despite that and the fact that there would be a new series debuting seemingly every week of the year, there were some that stood out from the pack and thanks to those previously mentioned providers and more, there was no genre that would go untouched. Here are some favourites from the past year which made for good viewing.

La casa de papel – A Spanish series renamed Money Heist on Netflix for some ridiculous reason, it turned out to be one of the most captivating shows of the past year, if not the most captivating show. With every episode, from the first moment to the last, it gets more intense and more exciting and makes for one exhilarating ride with nothing coming even close to being as good. It is the heist show to end all heist shows with action, drama, heartbreak and heartache, suspense and tension and some of the best characterisation to appear in any series one might have seen. Absolutely flawless.

Lost in Space – Netflix reimagines the Robinson family for a new generation with a big budget, some incredible effects and a big story that finds the group stranded on an alien planet after being knocked off course and enough obstacles in their way to make life much harder than it should be. It might be a bit of a slow burn, 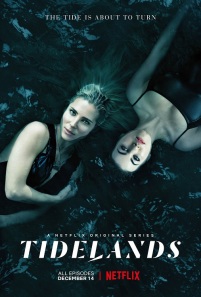 but the strong direction present ropes in the viewer through the Robinson’s ups and downs and leaves them wanting more when all is said and done.

Hard Sun – A pre-apocalyptic thriller that finds the human race knowing that the world is coming to an end, but only after the government tries unsuccessfully to keep that knowledge hidden.

Tidelands – When Sirens call, they do not always drag men to their deaths, at least not at first. As such they occasionally give birth and they leave those babies to die, though some do end up living and come to be known as Tidelanders. Sex and violence, drugs and murder, love and family are just a few of the things to be found in this Australian series and it makes for one of the more unique shows on TV.

Baby – Almost like the second coming of Skins, this Italian television show features a lot of the angst and teenage drama present in that aforementioned series, but finds the students a little more privileged though just as damaged.

Chilling Adventures of Sabrina – A reimagining of the popular Archie Comics character, a supernatural show with a good dose of Satan, comedy and witchcraft thrown in for good measure. A show that is so good that even though only the first season has aired, it has been renewed up to its fourth.

Your Face or Mine – A comedic game show that judges couples on their looks. Hosted by Jimmy Carr and Katherine Ryan, it provides a lot of laughs in its half-hour running time and is a great alternative to more serious fare.

The Haunting of Hill House – Mike Flanagan’s masterpiece based on the novel by Shirley Jackson enthralls viewers over the course of ten episodes and provides a few scares too.

The Originals – With its final season, The Originals would not only go out with a bang, but would do so with heartbreak as well and bring a tear to those that followed them throughout their five year run.

Daredevil – The final season of Daredevil had it all and made for the perfect send-off. With a fall from grace, a little redemption and the rise of the Kingpin, the show built upon the foundation laid in previous seasons and made for its best outing yet.

The Purge – While the show might not have featured as much carnage and violence as the films did, it managed to succeed through drama and characterisation and a solid foundation of suspense throughout its first season.

Runaways – While the team which did not really become a team until the end of the first season and did little running away, it made for a good prequel, setting it up nicely for the second series which will hopefully up the action and excitement.

Preacher – Preacher continues to get better and better with its leads becoming more and more interesting with every passing episode. This year’s breakout character would be Satan who was quite funny, much like season two’s breakout star in Hitler. Violent, amusing and unlike anything else, Preacher is a truly fantastic piece of television.

Westworld – Built upon the solid foundation of the 1973 feature film, the show continues to make viewers think with each rapturous storyline that unfolds on-screen. Where it goes from here after that ending remains to be seen, but it can only be good.

Tagged as: Favourites, Favourites of 2018, Television, The Telltale Mind