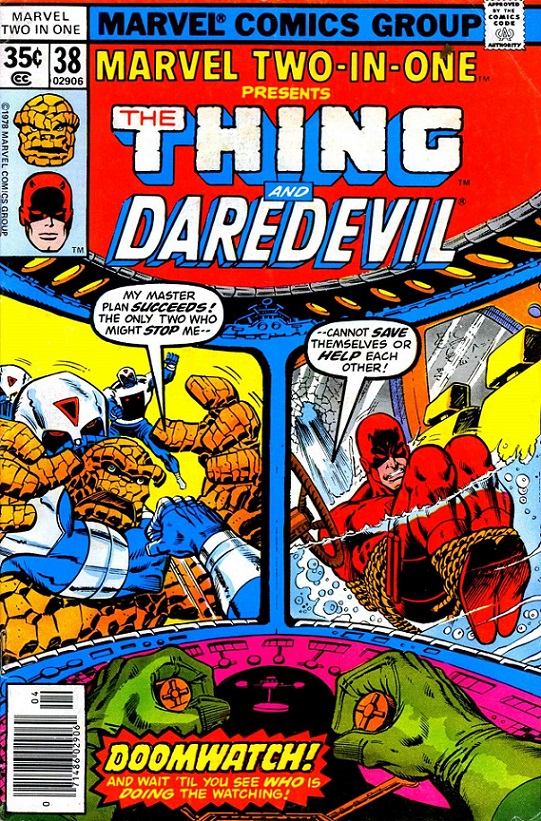 With The Thing behind bars, at least until his jury trial can start, Matt Murdock, a.k.a. Daredevil, has decided to do a little investigating so that he might free the hero. His speculations lead him to a chop shop as that supersonic hum he heard at the courthouse earlier before The Thing went berserk is located within along with the perpetrator Alex Stone. After a little interrogation, Stone makes an appearance and he is far stronger and much faster than Daredevil would have ever thought possible. Taking the reins this issue is Roger Slifer, co-plotting alongside Marv Wolfman and with artist supreme Ron Wilson at the helm once again. The team are excellent at what they do and the action is unrelenting as Daredevil and Stone go at it. Yet, due to being unprepared for what he has encountered, Daredevil is defeated. Relating to Ben what he has discovered as Murdock, The Thing is more than a little peeved and breaks out of jail to do a little investigating of his own, the difference being he is going to let his fists do the talking. While the last issue was a break from the norm, this book returns to form and sees the two heroes team up, eventually discovering what they were looking for. It turns out though, that the two are still outmatched as they are overwhelmed by robots, androids built by none other than the Mad Thinker. The great thing about this issue is that the pace picked up exponentially from the last and while the previous made for some good reading and gave the audience something a little different, a lot of action is not a bad thing and this book does not disappoint in that department. Also gone from this issue is the sad-sack attitude that Ben Grimm was sporting. When he thought it was his fault, the man was not the hero that everyone knew and loved and yet now armed with the knowledge that he was set up, Ben is mad and back to his old self, looking to get a little revenge so that he might clear his name and get back to living his life and more importantly, back to Alicia. Suffice it to say, the book ends not how one would want, but on a cliff-hanger once again as The Mad Thinker currently has the two heroes in his clutches. Knowing The Thing and the hero of Hell’s Kitchen though, they will soon turn the tables on the villain and hopefully put things right. Altogether this was a great issue featuring an incredible team-up between two of Marvel’s best heroes.