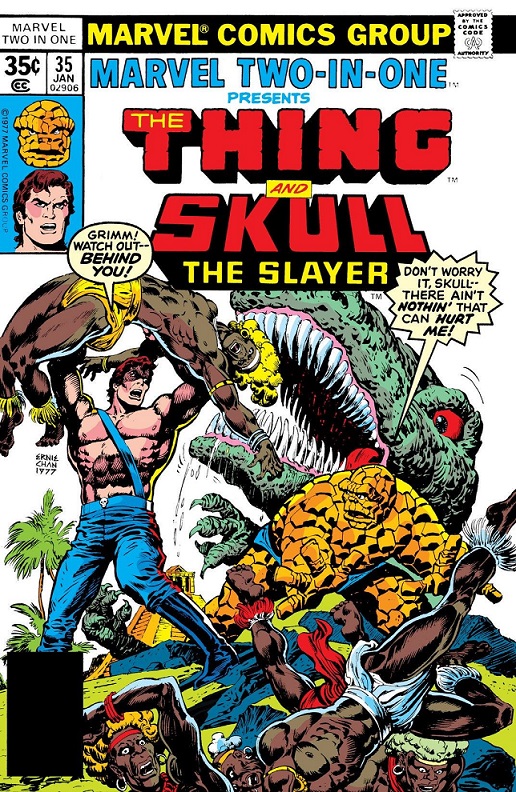 Opening the book up to the first page, this issue of Marvel Two-In-One finds The Thing willing to be a test pilot for a new plane for an old friend and as anyone knows who reads comic books , when someone is about to test a new plane, they can be sure that it is not going to end well. So it is that Marv Wolfman sends Ben Grimm on his flight and lo and behold, and of all the things that could possibly happen, a Pterodactyl appears seemingly out of nowhere, grabs Ben and the plane and promptly disappears into what can only be the past. As evidenced by the cover, Ben runs into Jim Scully – the one and only Skull the Slayer, a man who might be happier living in the past than he ever was in the present. With Skull are those who became trapped with him including Ann Reynolds, Jeff Turner and Doctor Cory and it is then that Wolfman goes to recap the eight issues of Skull’s solo series in just a few panels and throws The Thing into the thick of the action as everyone battles an Aztec priest. There are a few chuckles to be had seeing Ben as a fish out of water, but so are the rest of the cast and most of them wish to get home, though it seems an impossibility at the moment. There is one chance that eventually makes itself known and the group decides to try and make a go of it, if only they can stay alive in the meantime. It is not only the priest that they have to avoid, but the local wildlife as well and even with Skull and The Thing on their side, it may be too much to handle. Ron Wilson takes a break from this issue and in his place is the one and only Ernie Chan who does an incredible job at depicting not only The Thing, but the savage wilderness that everyone finds themselves in. There is a lot of action to be had and it begins right from the start and refuses to let up until that final panel. One person who is not having any of it is Doctor Cory who continues to believe that Scully is a murderer and the sooner he gets back to civilization and he sees the man punished for his crimes, the better. While it is good to see that Skull’s cancelled series gets a proper conclusion, it would have been better to see it happen in his own title and it lasting more than a mere eight issues. Though it does end on a cliff-hanger, it promises more pulse-pounding action and if it is anything like this particular book, readers know that they will be in for a treat.