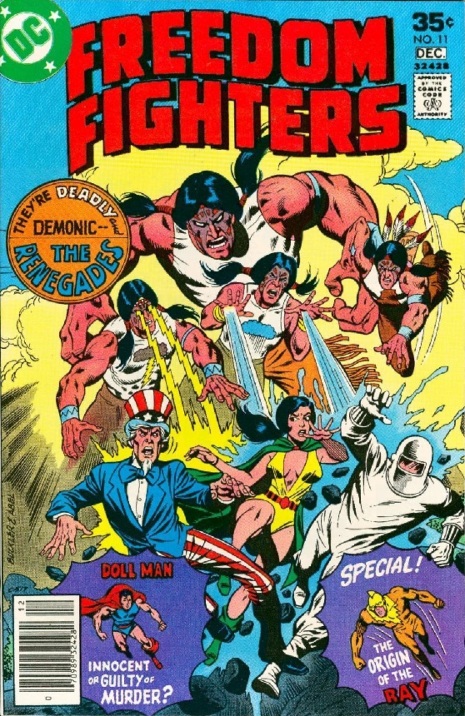 At the moment, the Freedom Fighters have been fractured, the team split into three and thus weakened as they are – there is now doubt and fear starting to enter the picture. One of these is The Ray who finds himself patched up but not knowing where he is or who his saviour is while Darrel Dane, better known as Doll Man, is in a court of law, fighting for his life against a murder charge of which he is innocent. Bob Rozakis puts Doll Man on trial and while it all takes place within this one issue, he manages to pack it with tension for those few brief scenes making the reader wonder if the accused is going to be freed but knowing that he will not. As for the rest of the team, The Human Bomb is getting a little more than discouraged with their current situation and as such, has started to lash out, but thanks to Phantom Lady, he manages to curtail those feelings until they go through with what Uncle Sam has planned. Suffice it to say, things do not go according to said plan, such is the luck of the Freedom Fighters ever since they came to this Earth. With some incredible artwork courtesy of Dick Ayers and Jack Abel gracing this book, they bring the remainder of the Freedom Fighters into contact with a bank robbery in progress being committed by four Native Americans who have just gotten a recent power upgrade courtesy of a prayer to their god. From this point on, the creators of this story pepper the book with a ton of action as the two factions go at it against each other and while Crazy Horse and his team get the upper hand during the first go-round, the Freedom Fighters learn quickly and when they fight for a second time, it is the aforementioned team that comes out on top. While all of it is a lot of fun and quite exciting as well, it is the trial of Darrel Dane that captivates because even though there can only be but one outcome, again with that previously touted luck the team seems to be sporting, one cannot help but wonder what kind of defence the hero will try and just how it is that he will get out of that predicament. As it is, by the time the book is finished, it essentially goes the way that one expects and it then enters the reader’s mind of just where all of this will lead to. There are some unanswered questions of course, queries that Rozakis will surely address and even though the whole Silver Ghost story has dragged on for quite some time, this latest chapter has livened things up more than expected.