For the most part, there were three ongoing plot lines during the third season of CW’s Supergirl. The first involved the loss of Mon-El during season two and the breaking of Supergirl’s heart. Eventually through a roundabout, time-travel kind of way, he returns but not all is the same and Kara, who thinks the second time might be the charm, is devastated once again as she learns that Mon-El is now involved with Saturn Girl of the Legion of Superheroes, who also end up staying for an extended period of time during this year’s run. That segues into why they stay and that is the threat of the Dark Kryptonians and the World killers, one of whom is named Reign and ends up being the overall big bad that Supergirl and the DEO have to face. The last major storyline to rear its head is the relationship between J’onn J’onzz and his father Myr’nn, one that sees the two reunited after many years apart and one that sees them eventually separated once again, though it turns out to be for the greater good. 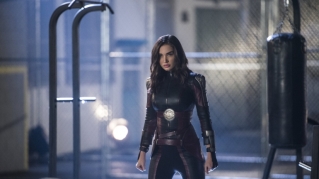 While the show would follow the same formula it established during its first couple of years, it would not be quite as strong overall and would commit the gravest sin of all which would be losing the viewer’s interest by dragging events out for far too long. It is the one major fault that this season would sport and though some shows can do it successfully like Supernatural for one, here the storyline with Reign just seemed to drag on for an eternity when it really should have been wrapped up within the first ten episodes or so. In fact, the latest seasons of The Flash and Arrow would both do the same and while they would be somewhat better, the long-form storytelling that these shows seem to be perpetuating are working against them instead of working for them. The only good thing is that every now and then, the show would take a little break and focus on one of the characters and expand upon what makes them tick – Alex wanting a baby, J’onn wanting to know his father, Lena Luthor trying to earn the trust of her peers and so on. Suffice it to say, that would never last for long and the show would get back to Reign and whatever was going on with her.

Another deficit the show would sport this season would shine through in the writing for even with the help of the Martian Manhunter, Winn, the Legion of Superheroes and Brainiac on the side of good, not to mention the rest of the DEO, Supergirl, Alex and more, they should have made short work of the Worldkillers and the Dark Kryptonians in no time. Instead they looked weak and ineffective, bumbling even and it was to the show’s detriment because of it. The show was also highly depressing for the most part, every character crying or worrying about something or other that negated any bit of excitement that would follow. Whether Supergirl mourning the loss of Mon-El, Alex depressed about being childless and the lack of a significant other, Jimmy Olsen tired about the lack of respect he gets, J’onn being uncomfortable around his father and then overly concerned about the old man every minute of every day and everyone’s fears over the Worldkillers – the show was dismal and depressing more often than not.

There were some bright spots to be had every now and then, but watching sad people for an average of nine hundred and sixty plus minutes of one’s life is enough to turn them off from ever watching the show again. Season four is going to have to pack the first episode with more action and excitement than the entirety of season three did in order to keep their audience. A tough feat maybe, but they have a lot to make up for.