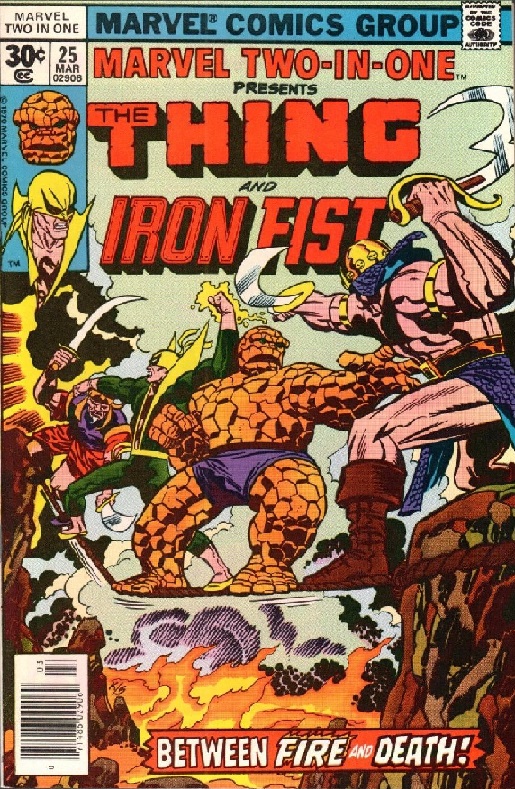 With Marvel Two-In-One #25, the Thing faces somewhat of a moral dilemma and he does not do so alone as Iron Fist is along for the ride as well. At some point, Benjamin J. Grimm was asked to help train one country’s army in the hopes that they would be able to fend off a predicted uprising. The same was asked of Danny Rand and the both of them had refused, what with making war not the greatest of ideas that anyone has ever come up with. Because of such, Ben and Danny find themselves kidnapped and forced to fight their way through numerous foes before finally learning the truth of it all and agreeing to help out in the end. What makes this issue so interesting is the underlying question that Marv Wolfman asks, that being should heroes or villains use their powers to empower the various nations of the Earth whether through simple training or giving them access to powers they should not have. It is something that these two heroes must now decide and it is obvious that they do not believe in doing so, but by the end of the story, it comes down to the two simply lending a hand where it is needed, thus avoiding the entire situation. Seeing Iron Fist team up with the Thing ended up being a lot of fun and the situation quite novel in itself, though it might have been a little more enjoyable if the two found themselves up against more conventional villains. What is quite humourous is the fact that once again, a date between Ben and Alicia was once again interrupted by forces outside of their control and one has to wonder just how the poor woman put up with it all, not including those times where she herself was either put in harm’s way or captured herself. Like many issues before, Ron Wilson’s art is quite spectacular and he is aided by Sam Grainger and Glynis Wein this go round. It is especially great to see Wilson lend his talents to the Living Weapon whose scenes look quite incredible, though the entire package makes for one good-looking package when all is said and done. There are a few new characters introduced by Wolfman for this issue, namely Prince Dragon, Queen Sen and the villain Chonga and by the end of this book, while things do not turn out exactly the way one would have hoped, it still manages to be somewhat of a happy ending.