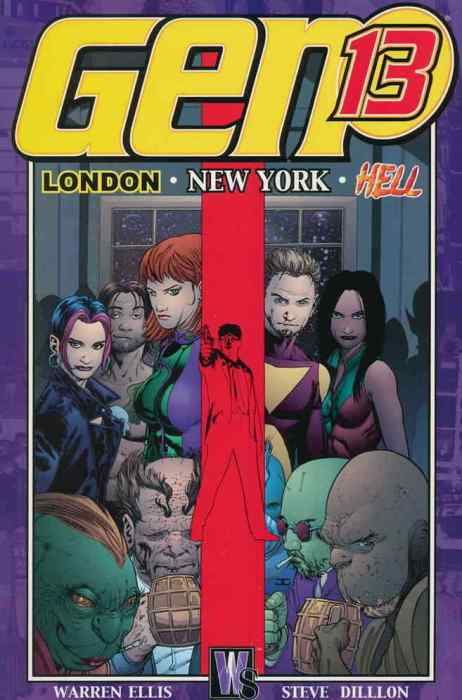 In London-New York-Hell, the Gen 13 team take a trip to London with their mentor John Lynch and then later to New York City and in both instances, encounter just a little bit of trouble along the way. Written by Warren Ellis with some incredible artwork from Steve Dillon, the trade paperback is comprised of two annuals, one from the regular series and one from the Gen13 Bootleg title, both somewhat tied together due to each respective tale taking place in a different locale outside of their native California and both titles no longer being published. With said creators on-board, one has to immediately know that a little bit of weirdness is sure to rear its head and it is not too long before it does just that.

Beginning in London, Lynch believes it is a good thing for the team to get away and stretch their wings so to speak, though the members of Gen 13 definitely feel a little differently to the whole winter in London scene. Things go off the rails when at Lynch’s favourite pub, someone decides to snatch a purse from one of the kids which leads to a chase below the building where it seems there are numerous dimensions that will require the team to act like one if they are to get back to normal. As for Grunge and Burnout, they decide to gamble in a drinking contest with a couple of the locals. Ellis also introduces an old acquaintance of Lynch’s who has also masterminded the entire affair, with some of the absurd making its way into the book as the man is in a wheelchair or more specifically, a toilet with wheels.

The second half of the book finds the team in New York, with none of them able to agree on quite where to hang out. Eventually Freefall meets a guy who seems like the perfect man when a strange police officer intrudes looking to arrest her new love interest. All is not quite right though and New York soon turns into Hell on Earth, something more than fitting in a story by Ellis and Dillon. It ends on quite a frightening note as well, something truly out of the blue and is definitely something one will remember after reading this book as it is not the usual happy ending.

Seeing Warren Ellis on a Wildstorm title is not exactly a new thing, but with these particular characters it was interesting to see just what he was going to do with them. The first tale was not all that bad, but was a little disjointed at times as if there were scenes cut out of the book while the second was much stronger with equal parts teen soap opera and horror film. Additionally, while the first story focused on the team as a whole, the second zeroed in on Roxy, revealing a little of her character and perhaps her eventual fate all in one go. There is some light humour sprinkled throughout, though it is much watered down from what appears in the ongoing series and the book somewhat suffers because of it. The kids have their problems of course and deal with a lot of drama, but they do have a good time and some of that was missing here. What little there is was good, but it could have been a little bit better. Aside from that, the book was fairly solid and made for an enjoyable read and if Gen 13 were to ever return to print again, Ellis could quite possibly be the man to chronicle those adventures.