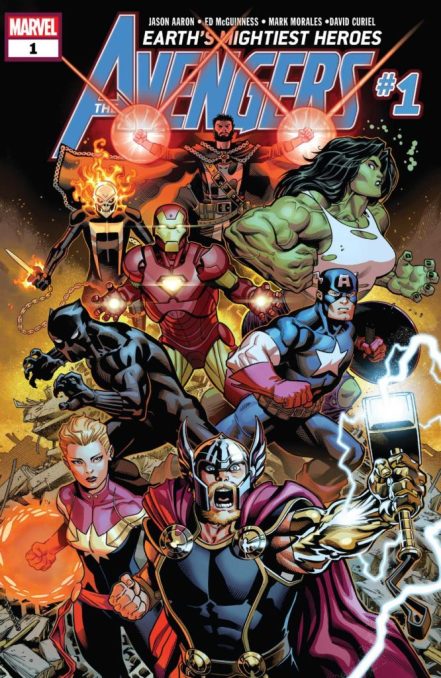 The Story – Currently there are no Avengers and Cap thinks there should be. Various events unfold including the arrival of dead Celestials and that is all there needs to be for the seed of the Avengers’ return to blossom.

The Take – In what seems a never-ending series of reboots and restarts for the title, Jason Aaron and Ed McGuinness take over as the latest creative team and its first issue, other than the No Surrender arc, is far better than the entirety of Mark Waid’s run. Maybe little happened other than character introductions and the plot device that will call these heroes back to form a team, but then little happened during the last couple of years since Hickman ended his tenure. Aside from all that, Aaron obviously understands the characters and what makes them tick and it makes for a very easy read, one that feels both like home and one that is hopefully going to take readers into new and exciting directions. It all begins here with a look back to the past and the Avengers of 1,000,000 BC led by none other than Odin himself and their quest to defeat a Celestial before it ends them and everything else. Surprisingly, though it is not expressly shown, they do just that and that in turn now affects the present day where dead Celestials are falling from the skies to cause quite a bit of damage all over the world. While little scenes involving those who are going to become a part of the team, as evidenced by the cover of the book, take place, it is that which involves Tony, Steve and Thor – the essential heart and soul of the Avengers which is most important. While the audience might see them hemming and hawing about it all, one has to know that they are eventually going to come together and reform the team to face those threats no one man can face. With the story by Aaron being quite solid and a good base to build from, McGuinness does a great job of translating it to the page with some assist from Mark Morales and some very bright colours courtesy of David Curiel. For his part, McGuinness always does a solid job of drawing those larger than life heroes and if they can keep him on a monthly schedule, or perhaps something even faster, it would be nice to see the man hang in there for a fairly long tenure as the constant team of rotating pencillers that seems to plague most titles these days is both tiresome and played out. Altogether, the new creative team has come up with a very attractive book that will call to new fans and old and if luck is with the readers, it will be around for a very long time to come.