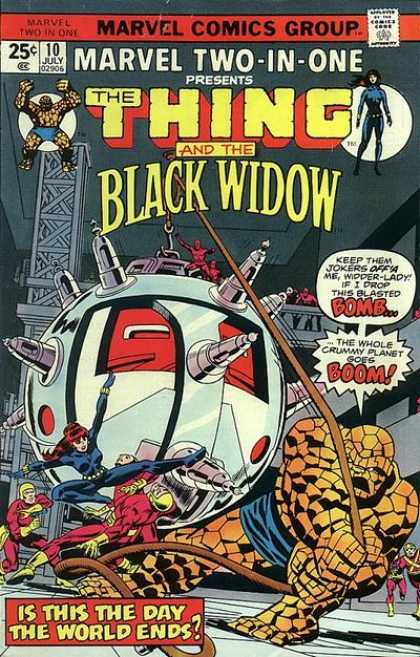 Coming on board with this issue are Chris Claremont and Bob Brown who present an action-packed tale that finds the Thing teaming up with the Black Widow in order to save the world. It seems a madman that Natasha once knew and was once in love with is now out to destroy whatever he can with an atom bomb bigger and more powerful than anything that has come before. For his part, Benjamin J. Grimm is brought into this all by accident, merely having a stroll in the park one day with his girlfriend Alicia when Black Widow and the villains who pursue her come crashing into his world. Once it starts, the excitement rarely lets down for a second and Claremont injects some intrigue and some tension as the two captive heroes make their escape and set about trying to stop Agamemnon from setting off his bomb. One thing that is readily apparent from reading this issue is just how much Ben’s speech patterns have changed over the years. Calling the Black Widow ‘Widders,’ is both hilarious and utterly ridiculous and it is probably the only thing in this story that puts a damper on things, as minor as it is. Having appeared earlier in the series as a villain herself, there is no explanation as to how Natasha has since found herself back on the side of the righteous, but it matters little as one simply has to accept it for what it is. As the book starts to wind up in the third and final act, the Thing is given a couple of truly exceptional scenes which show him trying to drag up that gigantic bomb from the bottom of the ocean, his hands and his muscles burning from the strain. Artist Bob Brown does a fantastic job in illustrating the events of the book, but really outdoes himself with those aforementioned scenes with the star of the title. With only a tiny bit of history given on this issue’s big bad, it would have been nice to see his past explored just a little bit more to add some additional context to his character and his motivations. Such as it is though, the issue was a lot of fun and after the nail-biting events that took place, it was good to see the Thing sit back and relax when all was said and done.