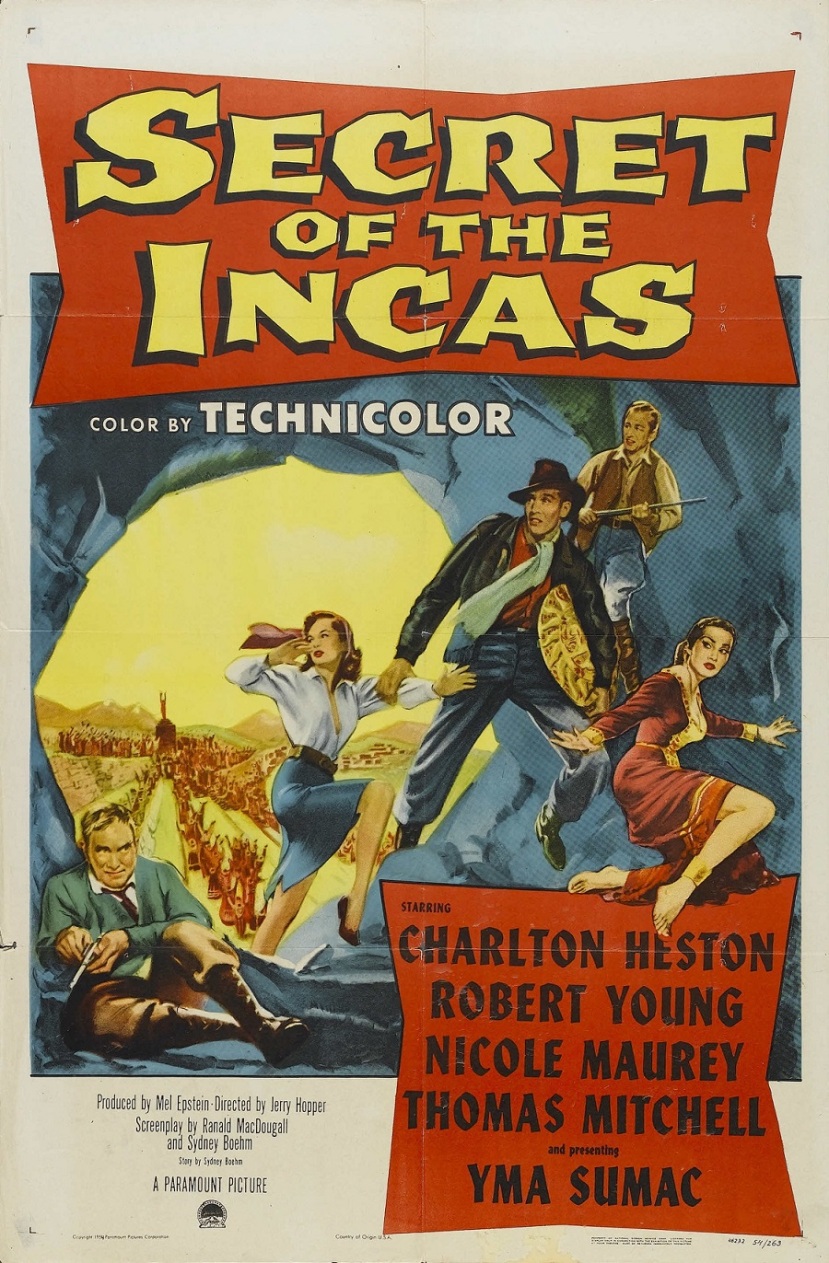 At first, it might seem like Secret of the Incas is a lost Indiana Jones feature, what with Charlton Heston looking exactly like Harrison Ford would many years later sans whip. The similarities are a little eerie and it is hard not to think that George Lucas did not draw at least a bit of inspiration from this film. Be that as it may, unlike those latter films, while this one

has a good bead on the dramatic, it is none too exciting as there are no daring feats to be found or traps to escape from. Enough does happen to gauge one’s interest, but it is more of a character piece than anything else, focusing upon Heston’s portrayal of Harry Steele – an adventurer/treasure seeker/tour guide. Though not necessarily a bad thing, the title promises more excitement than is given which is a little disappointing, but overall the picture manages to still entertain which is more important than

Starring opposite Heston would be Nicole Maurey as a defector from her country of Romania to which she then runs into Heston. Whether that is a good or bad thing, she has no idea, but the relationship that soon unfolds between the two is a lot of fun as Steele cannot help being the rogue that he is while Maurey’s character Elena is more like a babe in the woods than anything else, though she does have a wisdom of her own. While the two might seem like opposites, both are running away from something – she from her government and he from the responsibilities of being essentially an adult. The fact that the two end up together is both ridiculous and cliché, but the film could not have had it otherwise. As for the treasure in question, because there has to be a treasure in a movie such as this, it is a cause of consternation for many and once it is found, it almost seems like it is more trouble than it is worth. Eventually it ends up in the right hands and it leads to the reformation of Steele and the happy ending that was predicted during the first act of the film.

The cast did a great job with the material and included Robert Young and Thomas Mitchell among their number with a further highlight being Yma Sumac who would go on to perform a couple of numbers despite the movie not being a musical. In addition to the music, the sets looked great with the cinematography and direction tight and overall, made Secret of the Incas a movie well worth watching with Heston in fine form.