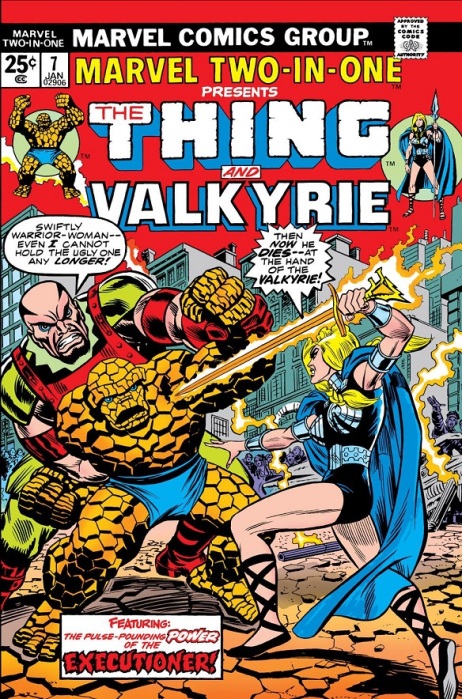 Continuing where the last issue left off, things become a little more off the wall with the introduction of Valkyrie and a homeless man named Alvin Denton who both tie into Destiny’s harmonica which in itself, is a little more than weird. As it is, the Thing has his hands full when the Enchantress and the Executioner decide to meddle in his affairs and make things all that much harder. While Steve Gerber writes a good story with no need for any background beyond what is recapped within, there is a much larger story overall involving Valkyrie and Denton, one pertaining to her origin which began far back in Defenders #3, Incredible Hulk #126 and continues on further into Defenders in issue #20. While it is a little strange to see a story jump all over the place, the Marvel Universe is an inclusive one and during this time period, it was normal for stories to sometimes migrate into other titles as evidence by the Daredevil team-up earlier in this very series. To his credit, Gerber writes it well enough that one has no need to read those other issues, but they do provide context for what has come before and if interested in reading the proper conclusion to Valkyrie’s tale, one could read about it further elsewhere. With some stellar artwork by Sal Buscema and Mike Esposito with colours by Bill Mantlo of all people, it looks great in addition to reading well and presents a fun collaboration between Ben Grimm, Valkyrie and the returning Doctor Strange. The addition of the Enchantress and the Executioner are good ones as the former is tied into Valkyrie’s overall story and once again shows how all corners of the Marvel Universe can bleed into one another. The only downside to all of this is that Valkyrie really did very little in terms of a starring role in the book. She was more like a supporting character, there to more or less fill a gap in the story than anything else. Even Doctor Strange had a bigger role than she did in this issue and her name is in the title. If there was one misstep, it was that, but overall, the book was still a good one and provided the entertainment one now expects from this title.