While The Neanderthal Man is a horror film in the vein of those Universal monster movies, it is more melodrama than anything else as poor Professor Groves is tormented by the fact that nobody takes his research seriously. It bothers him to no end, fuels his nightmares and is the scourge of his thoughts throughout the day. He knows that early man, specifically the

Neanderthal, was much smarter than where man sits today on the evolutionary scale, he simply needs that concrete proof to show up those who treat him as a crackpot. To that effect, after his experimentations on various cats have successfully turned them into Sabretooth Tigers, he tries his formula upon himself, much to the detriment of those around him.

Robert Shayne stars as the erstwhile Clifford Groves and though the man does his best to channel Lon Chaney Jr., and it is an effective job of it he does, making the viewer not so much as sympathize with the man, but at least understand where he is coming from. The good thing about Groves, is that he 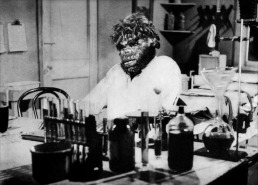 tests his formula on himself instead of subjecting some poor hapless soul to go through that frightful change. Feeling the thoughts and emotions of one’s self slip away as they regress into an earlier version of what mankind used to be has to be terrifying and why Groves would even do so to himself, having been ridiculed or not, is beyond reason. If the term ‘mad doctor’ or ‘mad scientist’ were to apply to any, it would be to Groves for mad he would have to be to do as such. As this goes on, the relationships between Groves and his family and friends deteriorates to the point where they almost give up on him, but not before discovering what it is that he is doing and trying to save him from himself. With Joyce Terry as his daughter Jan, Doris Merrick as Ruth – his fiancé and Richard Crane as Dr. Harkness, perhaps the only man that can figure out what it is that Groves has done.

As a whole, the movie is compelling as there is little better in a horror film than seeing a man go mad, discovering what lengths he will go to in order to prove himself in the right. The only thing that slightly breaks the momentum is when the creature puts in an appearance as the makeup used to make Shayne look like a Neanderthal is ridiculous, making him look more like a teddy bear than anything else. Even the Sabretooth looked slightly better, even if all it had was fake teeth. Still, The Neanderthal Man never lacked for trying and turned out to be seventy-eight minutes well spent.