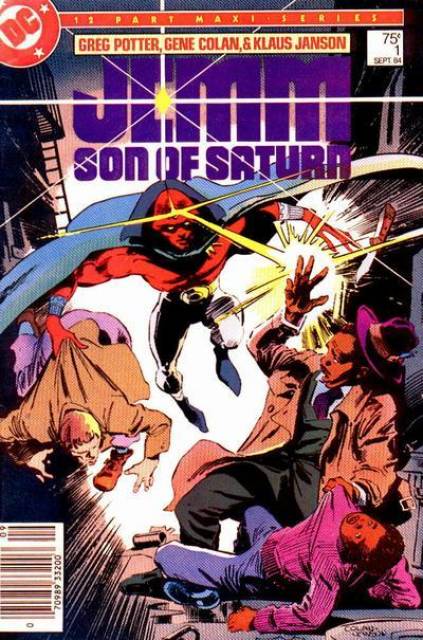 After the tragic events in the previous issue, Luther now finds himself in the world all alone, except for Jemm, his new-found friend. After looking for a little company with some homeless people and encountering hostility thereof, he gains a little sympathy after Jemm’s interference and finds a man who can help him lay his grandfather to rest. While doing so, Jemm and Luther are attacked by a robot which in turn is revealed to be a White Saturnian named Kamah. Continuing with the dramatics is Greg Potter and Gene Colan, two creators who manage to instill a lot of emotion onto the pages of this book. There is a heavy sense of loss within the story and not all of it belongs to Luther, for Jemm too bears not only the loss of a loved one, but of an entire race as the reader soon discovers. Normally, a story this depressing would almost be too much to handle for the casual reader – comics generally meant to entertain and usually through fisticuffs with a brightly-coloured villain. There is a clash present within that would usually make things pretty exciting and it does get the blood flowing a little, but that heaviness remains as Jemm cannot help but think back to the past from when he was young and it ties into the villain he faces – one of his own people whom he thought were all but extinct, all that is except for him. As down as it might make the reader feel, Potter has written his story so well that what might normally turn a reader away instead draws them in, turning out to be a very compelling read and one that makes the audience grow closer to its lead. For his part, Colan with a little help from Klaus Janson, delivers some powerful visuals, driving home the story that Potter is trying to tell. With some added intrigue involving the lone survivor from the robot attack, White Saturnians who should be dead and a mysterious gangster who was indirectly involved in the death of Luther’s grandfather, the book has a lot going for it and as the various plots start to play out, Potter and Colan make it impossibly hard to put down.