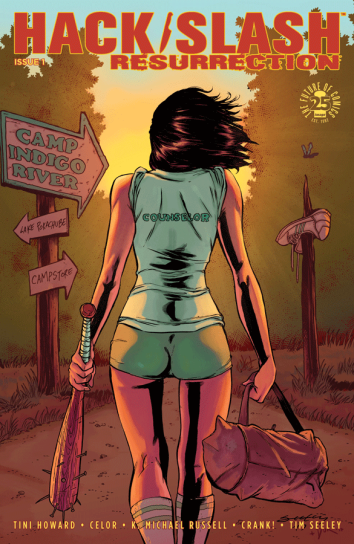 The Story – Cassie and her former partner Vlad used to kill zombies and all manner of creatures. Vlad died and then Cassie eventually decided to retire. Now she lives with her cat and plays video games but someone will not let her be and that is a big mistake.

The Take – Tim Seeley’s greatest creation returns in the first issue of Resurrection courtesy of Tini Howard and Celor among others, and they do a great job of capturing the look and feel of those original books. This new tale does not necessarily find Cassie in a dark place in her life, but it is a lonely one and she definitely feels it. Sure, she is not overly fond of the human population in general, but she does hate zombies just a wee bit more and when they come knocking, she cannot help but answer. There is a nice, light humour throughout the book as evidenced by Cassie talking to her cat, though going hand-in-hand with that is a palpable sadness as she has no friends or family to converse with. Adding to that is the fact that she dreams of Vlad at night, not being able to let go of one of the most meaningful relationships she ever had in her twenty-five years on the planet. Luckily, by the end of the first issue, she might have an opportunity to change her current situation though it does leave off with a bit of a surprise. Celor’s artwork is spot on, the man easily portraying Cassie as she should look and while it is a horror title, he still manages to give it a slight, animated look to keep it fairly lighthearted. If one were to describe this book to someone new, Evil Dead would be a great comparison with Cassie being the Ash Williams of the title and a book could definitely do worse when it comes down to it. As it is, Hack/Slash has been around for a good many years and every time it makes its way back to the stands is a good day indeed. Hopefully this series sells well enough that we see more of Cassie Hack on a regular basis as Tim Seeley has created a very memorable little corner of the horror genre that needs to be experience by as many people as possible.