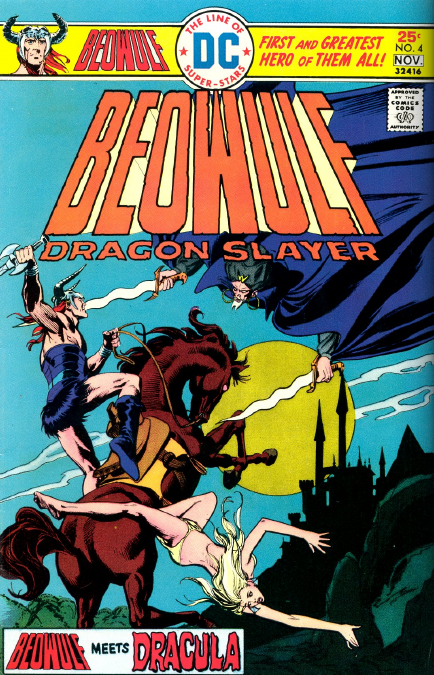 After successfully gaining the venom of the Black Viper, Beowulf has now set out to find the Zumak fruit so that he might finally have strength enough to defeat Grendel. With Wiglaf and Nan-zee by his side, they have travelled to the Far East where the sands burn as hot as the sun and the dangers present as bad as any that they have faced. It is here that Michael Uslan introduces the Prince of Geats to the Prince of Wallachia, known as the Impaler or more famously as Dracula. Beowulf discovers that the local nomads have been terrorized by the foreign monarch and so teams up with them in order to defeat the villain. Bringing Dracula into the story makes for a fun time and Uslan paints a fearsome portrait of the man, not undead as of yet, but soon enough as it is the man’s destiny. Ricardo Villamonte continues to transform Uslan’s words into incredible works of art and seeing Beowulf battle it out with Dracula makes for a very entertaining read. Like previous issues, Grendel grows impatient waiting for his time to come, for that moment when he might destroy Beowulf and because of this, Satan temporarily transports Beowulf half a world away that he might try and quell the uprising of the tempestuous monster. One would naturally assume that fighting Dracula would be enough for one issue or any one hero, but Beowulf is the exception and the book ends up being highly entertaining because of it. While it had to be expected, it is slightly fascinating to see just how invested Satan is in all of this. Years have assumedly passed and the Dark Lord is still following Beowulf and keeping tabs on him. It does seem a little understandable how Grendel might be a little testy after all this time as well, though with Grendel being a monster, it may not have had much patience to begin with. Beautiful artwork, a captivating story and the inclusion of Dracula make this book definitely worth reading.