Issue by Issue – The Eternals #2 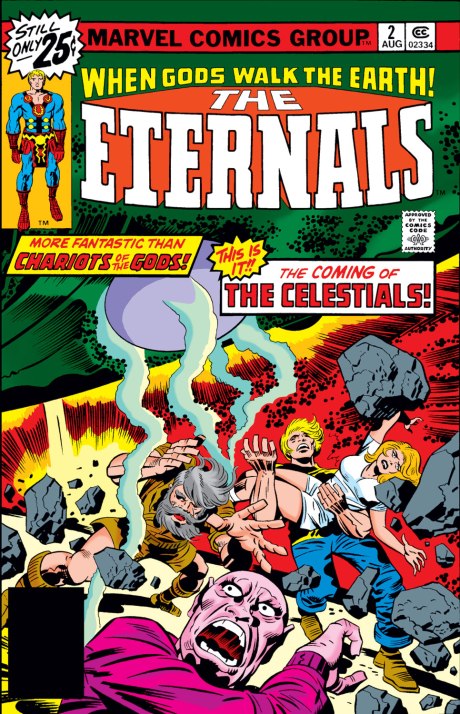 The ancient gods, now known as Celestials, have returned and while some like Ikaris of the Eternals welcomes them, others like Kro of the Deviants, wants no part of them. The odd man out as it were is Doctor Damian and Margo who are simply overwhelmed with the breadth of all they have learned. Jack Kirby, both writer and artist of this mighty epic, begins to expand upon the concepts introduced in the first issue and he begins to tie events into the mythological – ancient Incan tales, the myth of Lemuria and other sunken cities and even the Bible. Kirby continues to delve into the histories of these three peoples and their gods, the focus clearly on the Deviants for the time being and setting them up as the antagonists of the tale. That essentially was already a given as evidenced by their bestial appearance and aggressive actions, but Kirby cements it and paints them as despots who once ruled the world. It is shown that the Deviants had tried to destroy the gods before and after failing, the Celestials wiped the Earth clean, destroying the Deviant empire in the process and ever since, the Deviants have held a grudge. This issue also introduces a new cast member named Ajak, an Eternal released from suspended animation and one who was known to talk to the Celestials. As always, Kirby’s artwork is stunning and he never fails to make his characters as unique as possible as evidenced by Ajak’s Inca-influenced appearance and the Celestial’s imposing, robotic look. While Ikaris seems to be the star of the book, it is Margo and Doctor Damian who are the most interesting of the group, simply due to their wild-eyed wonder and seeming normality amongst the marvels surrounding them. One has to question what happens next now that the Celestials have set foot upon the Earth. What will Ikaris do and will the Deviants make war? Kirby knows how to excite his audience and make the reader want more, ending the story with both of those feelings front and center.