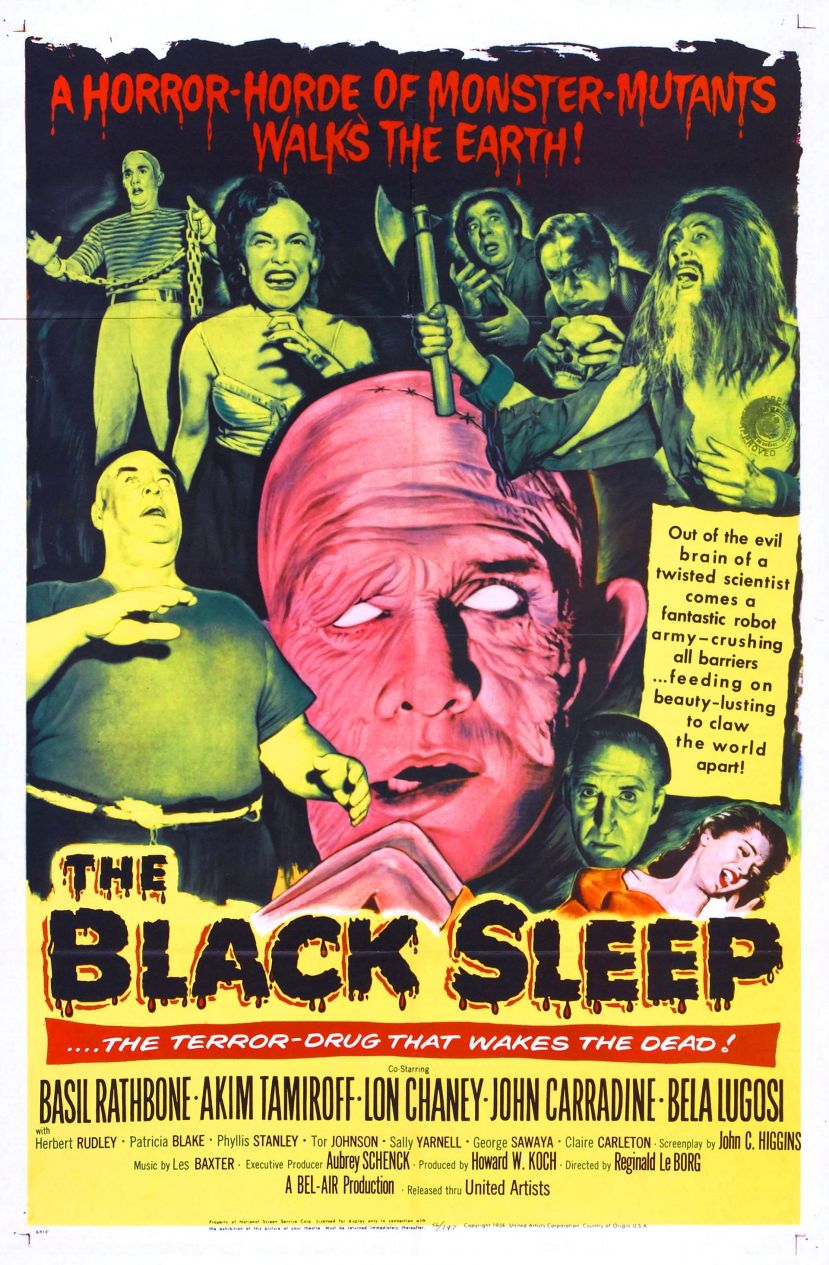 After the Universal Monsters were put to sleep and horror was seemingly taking a back-step to different genres of film in the nineteen fifties, it did not necessarily mean that it would disappear and those who starred in those movies from Universal’s heyday, would find work elsewhere. One such film would be The Black Sleep from Bel-Air Productions and it would employ Basil Rathbone, Lon Chaney Jr., Bela Lugosi and John 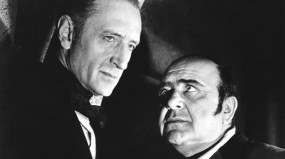 Carradine, all stars of the Universal Monster Machine. Joining them would be Herbert Rudley as the hero, Patricia Clarke, Phyllis Stanley, the wonderful Akim Tamiroff and the amazing Tor Johnson. With star power like this, one would think that there would be creatures aplenty in the film to keep audiences entertained, but instead it would turn out to be a movie about a mad scientist featuring many of its players as victims of said madman.

Rathbone is the man who is the star of the show, playing a husband by the name of Sir Joel Cadman who looks to cure his wife of a brain tumour. What better way to practice his procedures then on hapless people he drugs with a powerful narcotic called the Black Sleep, perfecting his skills to his patient’s detriment. Rudley soon enters the picture as a man named Ramsay, falsely convicted of murder and saved by Cadman who wants the man to aid him in his experiments. Ramsay soon discovers the truth and with 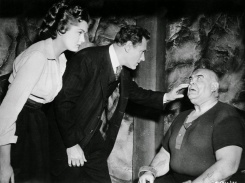 the help of the inmates, exposes Cadman and his villainous, criminal ways.

Directed by Reginald Le Borg, a person who was no stranger to the horror genre, the film would end up being a very moody affair, the horror palpable soon enough after the movie starts. There is something off about Cadman and it does not take very long for that fact to ascertain itself. Rathbone puts in an excellent performance as the mad doctor, though perhaps he is not quite so mad as he is desperate to save his wife. He is definitely in the wrong, operating willy-nilly on people without their knowing just exactly what it is he is doing, and that does indeed make him a villain, whether he does it for the greater good or not. A little sad to see was Chaney and Lugosi relegated to bit parts, the film more than likely able to benefit from their expertise and talent if given bigger roles, yet the filmmakers not capitalizing upon the talent that was employed. 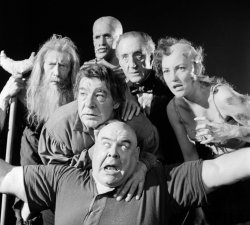 That is not to say that the rest of the cast was wasted, Lugosi and Chaney included, as everyone added a little something to make the film as good as it was.

It is no surprise that Carradine’s performance was a little over the top, the man rarely ever doing anything that could be called subtle, but it did suit his character and gave the picture a little unintentional comedy because of it. Lugosi looked frail and Johnson was menacing and overall, one could not really ask for more when all was said and done. The best part of it all happened to be the ending that was simply crazy when one thinks of it. With Carradine’s religious fanatic inciting all of the prisoners to violence including Chaney’s Mungo, proclaiming judgement and Cadman trying to survive it all to no avail, the film had more than enough horror for any fan.

With Rathbone in top form followed closely by Rudley as the protagonist, The Black Sleep may be a little cliché in certain aspects, but the cast and the smart direction more than make up for it. Dramatic, frightening and most of all, enjoyable, The Black Sleep is classic horror at its best.