Whether one wants to call this film I Wake up Screaming or Hot Spot, it is a captivating little noir starring Victor Mature, Betty Grable and Carole Landis. In it, Mature and Grable must solve the murder of Landis before he is sent up the river for it, Mature knowing that he is being framed. It had all begun when Mature bet his buddies that he could make average waitress Landis into a society dame/actress, to which he succeeds, much to the disdain of her sister played by Grable. Eventually Landis is murdered and it makes things just a little more

complicated because Grable is in love with Mature, guilty or not.

One of the more interesting aspects of the film is that it features one of the few times that World War II pin-up icon Betty Grable would take a dramatic role in a film, more often than not, the star gravitating towards comedies and musicals. Here she plays a woman helplessly in love with Frankie Christopher, a promoter who is just a little too good at his job as it gets him into more trouble than he ever thought possible. Mature compliments Grable perfectly as the man on the run, slick and confident, yet letting just a little bit of desperation show at times. The two have great screen chemistry and it helps to sell this possible doomed romance, more so than Mature and Landis during the beginning of the movie.

Like many good film noirs, it features all the usual hallmarks like rooms darkened by shadows, skittish men, tough cops, beautiful women 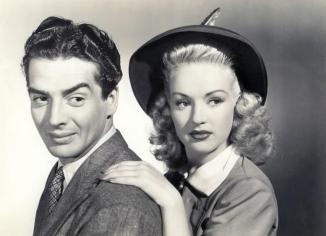 and a mystery around which it all revolves. Edward Cronjager does a great job on photography, creating a very atmospheric picture that director H. Bruce Humberstone then brings to life. All the tricks of the trade are brought to bear and it makes for one completely absorbing experience. Mature is unlike many of the actors associated with the genre and because of that he tends to be quite memorable, but even more indelible is Laird Cregar as the corrupt cop, the man Grable’s character thought was a villain and who just may end up being so. It is a moody picture that melds story and character in a way as to be totally absorbing and one of the better mystery/noir films to come out of the 1940s.

Adding to all of this is the score, which is used to great effect throughout the film, specifically the song Somewhere Over the Rainbow. It is repeated innumerable times, highlighting the tragedy of Landis’ character Vicky and the romance between the two leads. While the music and more all add up to make for a phenomenal picture, the only oddity about it all is the title, I Wake Up Screaming as nobody in the film actually does. Overall, a great film noir that is slightly different from the norm and better for it.