Issue by Issue – Kong the Untamed #3 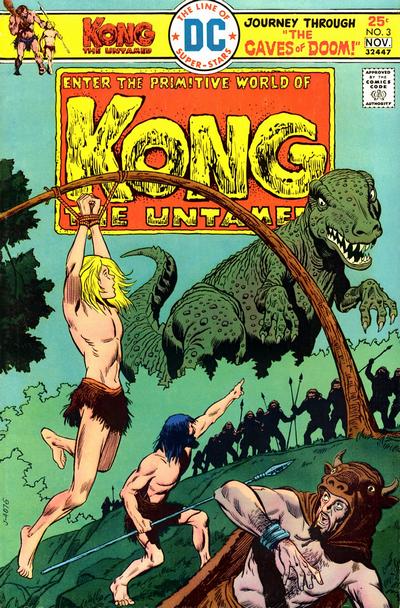 As Kong and Gurat hunt for food, their prey is taken away by a Sabretooth tiger and they are forced to abandon it and take shelter from the coming storm. Beginning things off on a sour note for the duo is Jack Oleck and Gerry Conway, ably assisted by Alfredo Alcala who brings it all to life and it continues with an encounter with Kong’s former tribe. Still being an outcast and vastly outnumbered, it looks as if the two are going to meet their end until that prophecy told by the tribe’s shaman comes back to haunt Trog once again and much to the advantage of Kong. If there has been one thing that has been consistent in this series, it is the trust and confidence that Kong shows those who return it in kind. Gurat is one such character that Kong has put his faith in, a friend in a friendless world and it is surprising how much the two have come to rely upon each other in such a short amount of time. In only two issues, each has saved the other’s life more than once and it has now gotten to the point where they count on each other intrinsically. Now that everything has been set-up, meaning story and setting and character-wise, Oleck and Conway move it forward by having the pair leave their mountainous home to a valley where things are strange and new, where it is green and teeming with life, with dinosaurs the likes of which they have never seen before. With new land also comes new peoples and the book leaves off with just that and the promise of new adventure. The artwork by Alcala, which was already established in the first two issues, is as detailed and as exciting as ever. While it was interesting enough seeing Kong survive in the harsh land he was born into, this newer, greener valley with creatures big and small will not only give Alcala a bit of a challenge, it will also make it much more enjoyable for readers as it will give them a chance to pour over his very exquisite pages all the more. A good story and a fun book, Kong the Untamed is definitely a lesser-known gem of the DC Universe.