When it comes to films featuring an invisible man, or woman in some cases, they all tend to feature a similar storyline whether it be the 1933 masterpiece starring Claude Rains, any of its sequels or even latter fare such as Hollow Man which starred Kevin Bacon. Said plot usually involves a man or scientist creating or stumbling upon a formula that would cause said person to become invisible. The person becoming invisible would eventually become addicted to doing so, finding it the most useful tool they have ever wielded and while some might use it for nefarious purposes and some for good, in the end, it was all for naught as it would eventually drive them to madness. While there has been 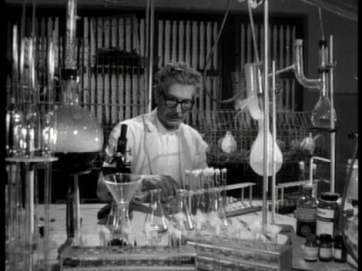 little innovation in the invisible man/monster genre, as long as the story is told well, what does it really matter?

As far as Invisible Man in Mexico is concerned, it was a well-told story, using many of the same tropes and clichés as other pictures, the main difference this film being a Mexican production. It is as a result, fairly predictable and deviates little where the aforementioned movies would take the material. It does feature some strong performances with Arturo de Córdova in the lead as Carlos and the titular Invisible Man, along with Ana Luisa Peluffo, Raúl Meraz and Augusto Benedico among others. One of the more interesting moments in the film comes towards the third act where Carlos becomes increasingly unstable; believing himself to be a servant of God and meting out punishment to those he thinks deserving. Surprisingly, there are some good special effects as well and when combined with some good storytelling, the film was quite enjoyable. If there was one fault to be had, other than the lack of originality, it was that the movie was a little overlong, parts of it becoming tedious instead of exciting the viewer as it should.

Overall, El hombre que logró ser invisible as it is originally known as was a good picture, but nothing that has not really been seen numerous times before.