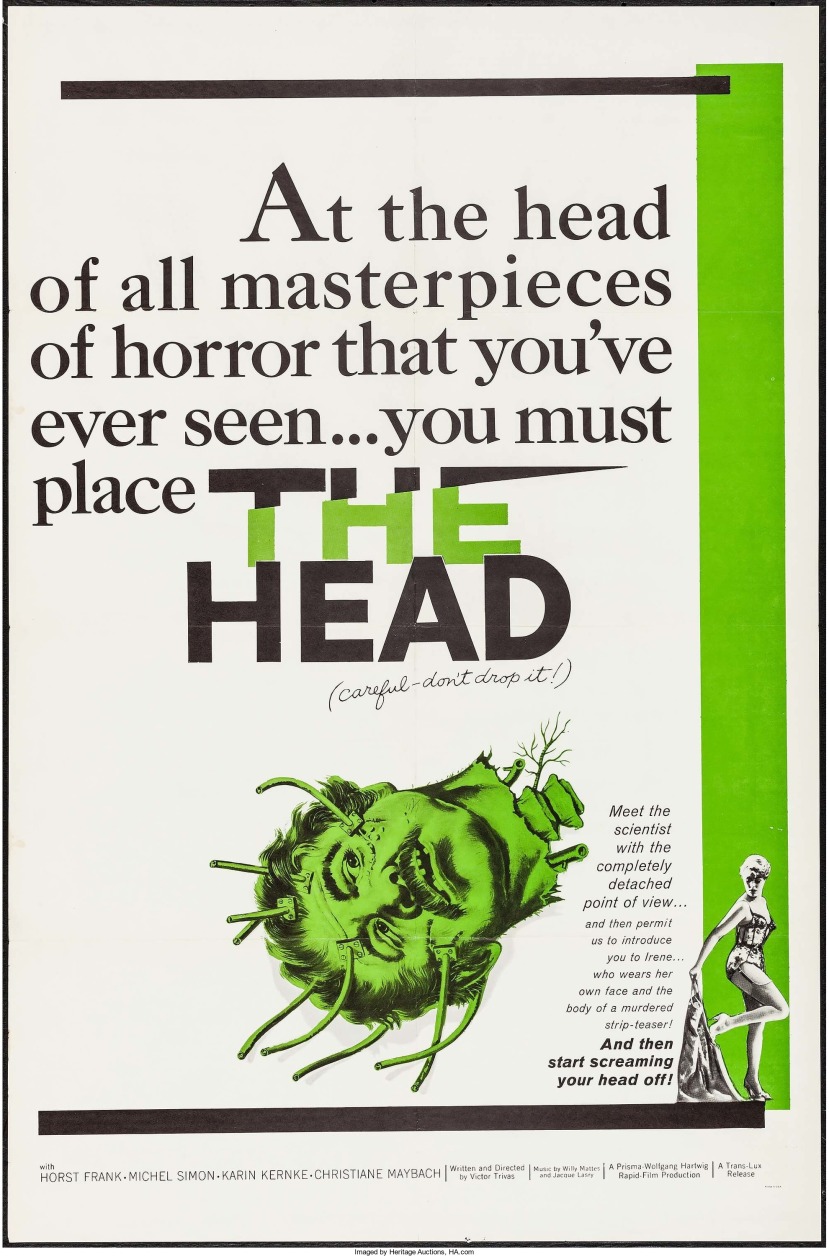 The Head is one of those fantastically insane films that sees a mad scientist obsess over the creating of life. This particular movie looks to put a bit of a spin on the subject and as such, manages to turn a familiar theme into something slightly different and as a result, something that grabs a person’s attention. There is of course, quite a bit of cheese and how could there not be as the film revolves around the removing of heads and finding new bodies for them, the science of which is ridiculous. Problems arise though, when one of the heads does not overly

care for its body, especially when she discovers where it came from and for the mad scientist; it is the beginning of the end of the road.

Though produced in 1959 and obviously made on a budget, writer and director Victor Trivas does a great job at making the picture as good as he can and it turns out to feature some great special effects and be a highly atmospheric affair. Doctor Ood is maniacal and determined to carry out his experiments no matter the obstacle. Horst Frank who stars as the villain is perfectly cast, the man not only able to play crazy, but scary. Some of these mad scientists are misunderstood or believe that they know what is best for mankind, but in Doctor Ood, there is little to redeem the man even after he reveals a few personal details later in the film and as it is, the audience holds no

sympathy for him, feels no empathy. All of that is reserved for Irene as played by Karin Kernke, the woman Ood seems infatuated with. After Irene receives her new body, Trivas starts ramping the tension up slowly after multiple comments thrown her way, she begins to realize that her body is not her own and that it has come from someone else. With that realization, a truth comes unbidden to her mind. She knows what it means, knows but does not want to know and when she confronts Ood about it, her worst fears come true.

There is another scene similar, yet quite different to that and it is moments such as these that make the movie as good as it is. When Irene learns that truth, the fear and horror is apparent on her face and it is both a frightening and gripping bit of cinema. The horror in the movie does not get any better that, but Trivas makes it last and gives the film the pervasive feeling of being unsettled, yet one that speaks of doom and it is not for Ood’s victims. There is a bit of overacting practiced by both Kernke and Horst, but they sell the material enough to make the picture a must-see.

While some might be quick to dismiss The Head for essentially being quite silly in nature, it takes itself seriously and is a very moody film, one that will not only surprise, but delight.