Though highly entertaining, it is not because Crucible of Terror is the pinnacle of movie-making. It is by all accounts, a little silly and a little cheesy and while it tries to be a serious film, it ends up eliciting more chuckles than it does scares. That is not a bad thing per se as again, it was a very enjoyable picture, but when a filmmaker, which in this case is Ted Hooker, is trying to make a serious horror movie, making sure

those elements that are needed to frighten the audience are all lined up is a must.

It all begins with a very solid opening scene where a woman, who still happens to be alive, is covered in molten bronze – forever cast as a statue. Horrific does not begin to describe what just happened. From there, where it looks like the film is going to be one thing, it ends up being another and takes that promising beginning and squanders it. Instead, it finds an art dealer looking to get more pieces like the statue, hoping to make some cash and heads out to do so with the son of the artist. Arriving in the country, he meets Victor Clare – the artist in question and discovers he is somewhat of an eccentric and that procuring the art will be a little harder than he thought. It is not too soon after that murders start to take place with Victor Clare being the suspect in question and Hooker throwing in a little mystery to keep things interesting.

As bad as some might think it to be, the film ends up being as good as it is due to the talents of Mike Raven – a poor man’s Christopher Lee, though his spitting image in most cases. Raven is electric in the sense that one cannot take their eyes off of him and it is almost like he knows it, which makes his performance even better. Raven is creepy to the extreme, an aging artist whose lecherous ways are all too prevalent and all of the women in the film knows it. The women are beautiful of course and Raven tries his very best to get with them, the man thinks 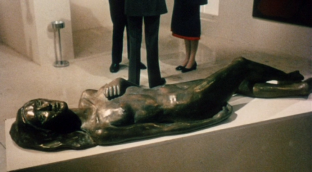 himself irresistible but the women rightfully and essentially want no part of him. Mary Maude stars as the main object of his affection and the woman whom he pursues for the bulk of the picture. A lot of the dialogue in the movie was pure drivel, but in the capable hands of Raven, he made it sound like Shakespeare, though it obviously was not.

The one thing that was sorely missing from this picture was a good dose of horror. As previously mentioned it began well but soon lost it to simple drama. Mike Raven did his best to send a chill or two down the spine, but there was very little blood and the murders were fairly tame. Given that opening, one would expect there to be quite a bit of the red throughout the movie and when that failed to materialize, it was just a little bit of a disappointment, though, by the end of it all, it did somewhat redeem itself just a little. Taking it all into account, Hooker does his best to weave what he does have together and thanks to the cast more than anything else, Crucible of Terror ended up being far better than it should have been.