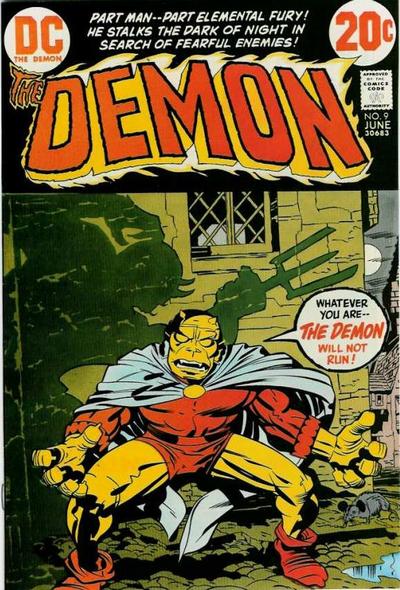 Before the book continues onwards with the saga of the Phantom who has kidnapped Glenda Mark, Jack Kirby gives the reader a peak at a moment during the Demon’s past where even then, both the creature and its alter-ego caused consternation among the people. It is but a brief interlude before things get back to the problem at hand and that involves not only Glenda, but Jason Blood who has used the Philosopher’s Stone to rid himself of the Demon, perhaps the only thing outside of Merlin that could. Suffice it to say, Blood realizes that he has made a mistake as he could not predict that the Phantom would do what he did and is now helpless in the face of it. Kirby creates an interesting dilemma for Blood, one that finds him trapped between moral obligation and freedom. The right thing to do would be to somehow bring the Demon back into his life and rescue Glenda, but in doing so; he will forever be trapped once again, bonded to a creature from Hell, but this time in a prison of his own making. There is only one recourse and Jason does the right thing and discovers that he can use the stone to bring the Demon forth from wherever it was banished. The best thing about the entire issue though, is not the Demon or the quandary that faces Jason. Instead, it is the villain, that dastardly Phantom who is as complex a character as any that Kirby has ever introduced. The man is mad, thoroughly so, and his actions as such are completely unpredictable. The Phantom lives in his own reality, one where Glenda is the woman who betrayed him come back to life. Glenda is terrified of course and Kirby portrays that quite accurately, but it is not just the situation that perturbs Glenda, but the Phantom himself as Kirby has made him not only a monster in deeds, but one in physical appearance as well. Of course, Kirby packs the book full of suspense, tension and horror and proves once again why he earned the moniker of the King. There is a cliff-hanger, one that finds the Phantom facing off against the Demon and to say that it might be a bit of an unfair fight is putting it lightly, though the Phantom has surprised the reader thus far so things may not be as cut and dry as one might think.