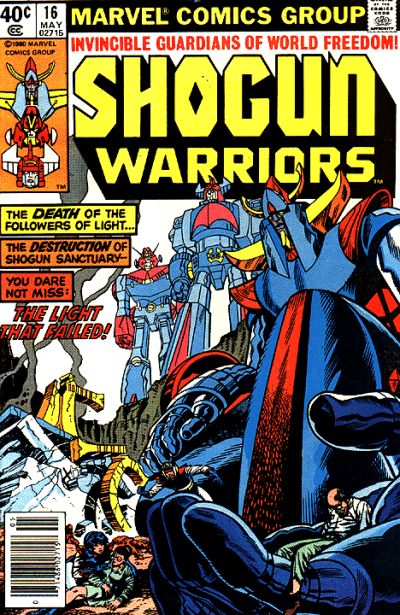 While out practicing maneuvers, the Shogun Warriors and their pilots decide to call it a day and head back to Richard Carson’s place. Though welcomed by Deena’s shotgun, the friends begin to relax when they are suddenly gassed and those mysterious men in black introduced a number of issues ago, break in and steal the means to take command of the Shogun Warriors. It is, by all accounts, a disaster waiting to happen and it is all courtesy of Doug Moench and Herb Trimpe who return to chronicle this latest chapter. Almost immediately, Moench escalates the action, excitement and danger and Trimpe translates it to the page in the most spectacular of ways. Realizing that the men in black, having been discovered to be robots, are intent on getting to the Followers of Light in the Himalayas, the pilots have no choice but to try to race them there, the only problem being the army between them and the Shogun Warriors. Though the book is predominantly filled with action sequences, Moench manages to pepper it with some good characterization throughout. Genji proves she is the best tactician upon the team while Ilongo has a lot of heart, but in one of the best scenes to take place, Richard demonstrates an act of selflessness that is courageous, dangerous and thrilling in order that he might save his friends near and far. As it is, readers are in for a shock with this issue as Moench and Trimpe do the unthinkable and kill off most of the supporting cast. While it might make sense story-wise, one has to wonder where things go from here as it puts the friends in a very precarious position. Additionally the power, or at least a part of the power in charge of the robotic men in black and the alien beast they end up defeating, stands at least partially revealed. What can the heroes do to defeat such an unimaginable being, especially now? A lot of questions present themselves and not too many answers to go with them. Overall, this is a story that changes the status quo and quite possibly, not for the better.