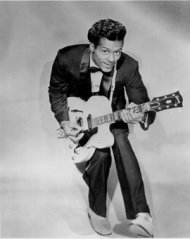 Chuck Berry – singer, songwriter and progenitor of rock and roll has passed away and with him essentially, the end of an era. There are few who can claim to have changed the face of music as much as Mr. Berry did with hits like Maybelline, Roll Over Beethoven and Johnny B. Goode and it is to his credit, that those songs will always be remembered. Unlike many musicians who took time off from the craft or toured only every time an album was released, Berry toured extensively and did so all the time up until he was no longer able, far into his eighties. The man might have had a few rough spots over the years on said tours, but he had a strong work ethic and few can ever fault him on that. Berry had such a powerful influence on the craft and his songs would be featured in many films over the years including one little picture about time travel quite memorable, so much so that every time a person thinks of Michael J. Fox playing Johnny B. Goode in Back to the Future, one cannot help but think of and thank Chuck Berry for releasing such a classic. While the man may not have had as many hits or led as glamorous a lifestyle as some of his compatriots from the era, he always stuck to his guns, playing rock and roll throughout the years with a passion and a fervour that few could ever hope to match. It is a sad thing to have lost such a man who helped to create a genre that changed so much, but his music and his legacy will live on.