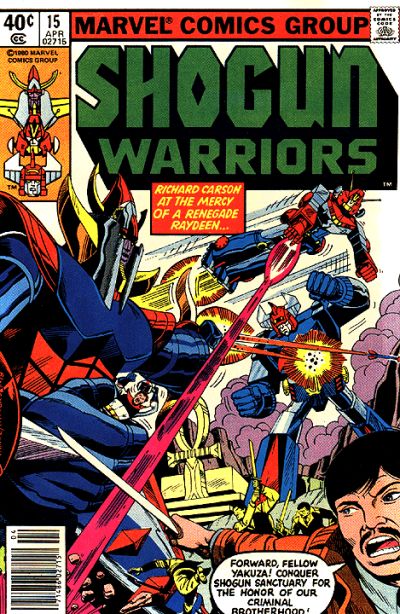 After the cataclysmic happenings which saw the Shogun Warriors pull together tighter as a team to save the Earth, they now spend a little time back on the planet practicing their skills. Soon enough, just when it seems like things might have settled down for the pilots and the Followers of the Light, the new writer-artist team of Steven Grant and Mike Vosburg send them a new threat in the form of the Yakuza. Of all the foes the Shogun Warriors have fought against thus far, whether it be monsters or alien or man-made, they have all been highly formidable. Now, as one reads the books and discovers that the Yakuza are the villains, as imposing and skilled as they may be; one cannot help but be a bit underwhelmed by the choice of foe. Surprisingly, the bad guys do a good job of infiltrating the Shogun Warriors and commandeering Raydeen, no matter how illogical a few scenes are here and there. This time there is no monster to fight but the human kind and the pilot’s very own brother robot. Luckily for Genji, Ilongo and Richard, the Yakuza are not as skilled in the piloting of the thousands of years-old Warriors as they are. For the most part, Grant crafts a fine tale even though he made a strange decision to include said villainous group. The one problem that is present is the fact that Grant does not have a feel for the characters as of yet and they do not completely sound as they should, their personalities being a little off. If Grant stays on the book, perhaps that will get better with time, but it made for a bit of a strange reading experience. One thing that also happened to be missing were the supporting characters that Moench introduced over the course of the series, especially as it left the plotlines involving Richard and Deena and that of Ilongo and Judith unfinished. Mike Vosburg lends his talents to the story, proving to be an able replacement for Herb Trimpe and he manages to make it all quite exciting. In the end, thought there might have been a couple of missteps, the fifteenth issue of Shogun Warriors turned out to be a fun excursion.