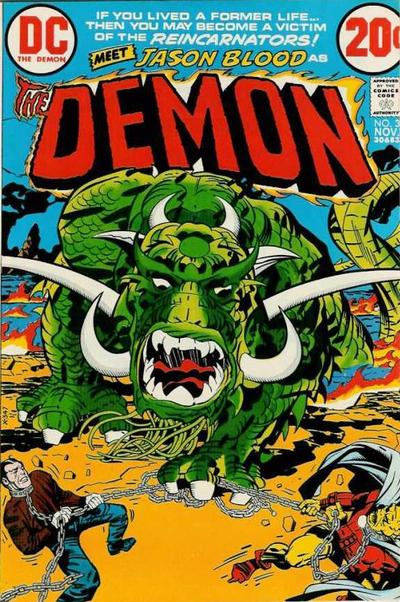 Jack Kirby and Mike Royer send a new threat to tackle Jason Blood and his friend Randu Singh, a cult as old as the Demon itself, maybe even older. The cult of the Master-Eye is a powerful group, influencing events as they please through agents who have been regressed into previous incarnations of themselves. It is a novel idea and one that seems to work as after each assigned task, said agent is reverted to its original form with no memory of what they have done. Unluckily for them, Jason and Randu are next on the list, but never did the cult think they would have to deal with the Demon. Kirby’s imagination is in full force once again, blending the modern day with ancient magics, but instead of a strong leader in Morgaine who is no stranger to demons and such, the cult has never encountered the monster that Jason Blood becomes. There is a ton of action once the Demon is called forth by Randu, perhaps the only man who knows how to summon the monster outside of Merlin and once he starts to go to work, he does not want to stop. Even Randu is subject to the Demon’s mercy for a moment, that is until he takes off after the cult members. It is not too long afterwards that the Demon manages to destroy the Master-Eye and the cult as well, the men being no match for a demon from hell. Kirby’s artwork is as sharp as ever with Royer giving it that extra little bit of an edge. There are a few moments that really make this book seem like the horror title it is, simple scenes like seeing the Demon’s head through the fire or watching him climb out of the Master-Eye like a creature from the pits. There is no denying that Kirby was a master of design and it is definitely on full display here. Though not exactly front and center, Randu is a very interesting character, still very much shrouded in mystery and his relationship to Jason provides a continuing point of curiosity for the reader. Eventually Kirby is sure to get around to Randu’s background, one can be sure it will be most intriguing once it is revealed. This was yet another great issue by Kirby and company, blending action and horror together in the best of ways.