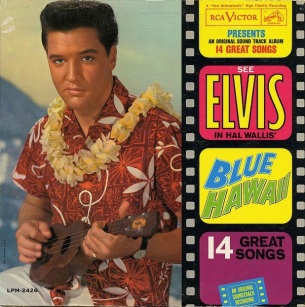 Throughout the 1960s, Elvis Presley made a lot of movies. Not all of them were probably as good as they could have been, but as the Colonel saw gold in them hills and because at the time Elvis listened to every word that the man said like it came from on high, movies and movie soundtracks would consume most of his life for that decade. There are a lot of stories about the disappointment that Elvis felt in the scripts and the roles and even the music after a time. A person can only churn out so much before it gets repetitive and the quality diminishes. In the case of Blue Hawaii released in 1961 during the beginning of this period, that disappointment had not set in as hard as it would and the film would be one of his better movies, both in terms of performance and quality. More to the point, audiences also loved the film and as a result, the soundtrack would hit the top spot on the charts and be nominated for a Grammy. Much like all of Presley’s films, except for the odd one like Wild in the Country or Charro!, the movie would consist of lighthearted fare that would find the man eventually finding love by the end of the picture and while it would be formulaic, there was no doubt as to the charm and enjoyment that it exuded. The movie itself would leave such a mark that after Elvis quit making films and returned to live concert performing, Can’t Help Falling in Love would end up being the closing number to nearly every show he would ever put on, with Blue Hawaii making the occasional appearance and Ku-U-I-Po being sung during his Aloha From Hawaii special. Even now, over fifty years later, the film still remains highly entertaining and the music, at least for the most part, a really great listen.