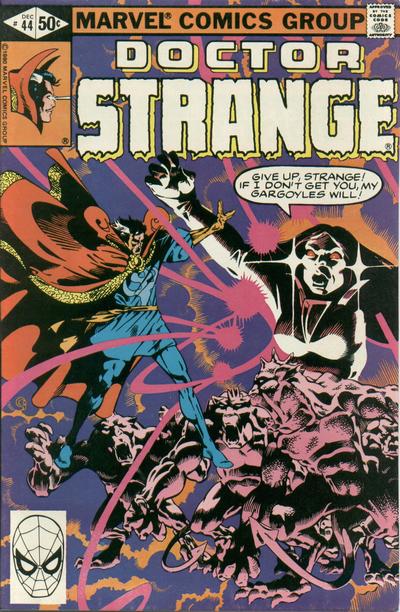 The Shadowqueen is a relentless force of evil that has become feared in all the land, but it was not always so. In this tale by Chris Claremont and Gene Colan, they delve into her history and that of Wong’s long ago kin, Kan. It is a bit of an interesting read as those who peruse the book will learn that Kan and Wong were not all that different from each other, aside from Kan’s sorcery that is. Before she became as she is now, the Shadowqueen was just the sister of a brother who ruled and who wanted to rule all. For that he needed Kan and with a little trickery, his wish came to pass. Over time, Shialmar and Kan fell in love, but there came a moment when death fast approached and so Shialmar made the ultimate sacrifice, giving up her love and giving up her life to become a tool of the N’Garai. Claremont and Colan weave a tapestry in the telling of this story, but it soon comes to an end as the companions find themselves in battle against the Shadowqueen’s gargoyles. That leaves Doctor Strange to face off against the big bad herself and when she declares herself the Sorcerer Supreme of her world, Strange finds it to be true. More to the point, the Shadowqueen is far stronger than Strange is and it is all he can do to stay alive. Though the first half of the book was quite compelling, the second half is no less so and part of that reason is Gene Colan who infuses it with almost a frenzy of action. Clea, Wong and Silver Fox are on the ropes and faring badly while Stephen cannot get a foothold. It is only through a momentary distraction and a last ditch effort combined with a lot of luck that finally turns the tide. This issue wraps up the current story and plot involving Wong, but there is still the mystery of Dormammu’s shades and just what it is they want with Clea. Also, with Clea being a fairly jealous woman, one has to imagine that when she finds out Stephen has hired Sara on; she will not be too pleased. Altogether, this was an above average story that was a pure joy to read.