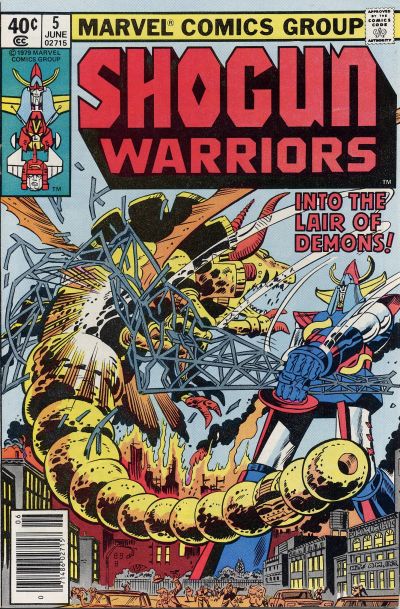 Lord Maur-Kon’s Mech Monster has been transformed into an abomination made up of equal parts science and sorcery thanks to his servant Magar, and now it battles Combatra and its operator Genji who may not be up to the task. Doug Moench infuses Genji with more characterization in this issue than seen previously, like pride and confidence and even a little ambition, and while it is nice to have faith in one’s abilities, it may just end up hurting someone she does not want to, like herself for one. Though we have seen Combatra in battle before, this is the first time that all of its abilities have been put on display. As shown in the previous book, while each Shogun Warrior can transform into something else, Combatra can separate into five distinct vehicles which comes in handy when a tactical advantage is needed. In this battle, Dr. Tambura has little advice for our heroes as he has never encountered a creature such as Mech Monster before. It is here that Genji has a big idea, something that Tambura mentioned and so she decides to follow the creature’s path back to its origins, not knowing that it will land her right into Lord Maur-Kon’s lap.  Moench does not only do a good job of keeping things moving along, but continuing to keep the villains at odds with each other. One thing that is for sure is that if Lord Maur-Kon and his people continue to argue amongst themselves, they will never best the Followers of the Light. For the most part, the bulk of the book is made up of action which Herb Trimpe masterfully renders, the Shogun Warriors battling the Mech Monster and with the creature out of control and Genji out of commission; the next book should be quite interesting. Out of every issue that has been released thus far, this book’s cliff-hanger really grabs the reader as Moench and Trimpe give it a sense of gravitas, a future that may come to exist without one of the Shogun Warriors. Exciting to say the least.