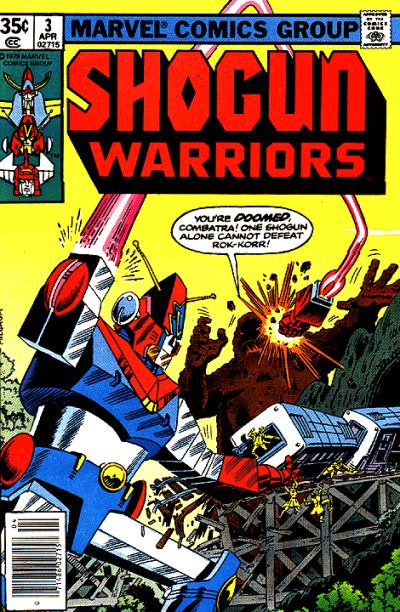 The third issue of Shogun Warriors by Doug Moench and Herb Trimpe delves right into the action as Danguard Ace, Combatron and Raydeen must now face the might of Rok-kor once again, except this time the monster has been split into three separate elements.  Though they might be new recruits pulled from very different lives from all over the Earth, the team is eager to put their training to good use.  For the moment, it is somewhat of a fair fight, though our heroes must also deal with the threat of a nearby train that is poised upon a broken trestle, ready to fall at any moment.  Moench for his part, packs as much of a punch as he is able with the story, though there is so much action present, that the tale almost writes itself.  It is a good thing for the reader though, that Moench does not merely craft a slugfest, but also peppers the book with a little mystery, a little suspicion and a little betrayal and all of that having to do with what Lord Maur-Kon is planning.  It looks as if the villain has decided that though his sorcery is powerful, it would not hurt matters to throw a little technology back at the Followers of the Light.  For Maur-Kon, it is a simple decision, one made due to the fact that he wants to win, he wants to destroy the Followers of the Light and he will do so in any matter that achieves that goal.  Not all of his followers agree as such though and there is a chance that it could cause trouble down the line for the evil mastermind.  The battle between the robots and the monsters is a fierce one and while our heroes do their best, there comes a point when they almost lost it all. Thanks to a little luck and maybe a little ingenuity though, they pull out a win.  There is very little depth to this particular tale, it essentially just being one long book-length fight, but it does grab your attention and the artwork by Trimpe does not hurt matters any either.  Another truly fun story.