Should Have Stayed Home – Revenge of the Zombies (1943)

With the release of King of the Zombies in 1941, Monogram Pictures commissioned a sequel and for most part, it is an entirely new film with only Mantan Moreland, Madame Sul-Te-Wan and the zombies as holdovers. Moreland would play the same character in Jeff and run afoul of the walking dead more than anyone else in the movie, much like

before with the results being quite hilarious. Like the previous feature, Moreland provides the comedy relief and just like the aforementioned movie; most of the film revolves around him.

Also starring in this movie is John Carradine who of course plays the villain, a man whose wife had recently passed and of whom he cannot let go. With Carradine’s name on the bill, you would have to expect that there would be a fair amount of horror present in the film and yet, there is very little. The movie has that great atmosphere like its predecessor established, but there is hardly anything more than that which is a bit of a shame. Carradine does his best to be as creepy as possible, yet thankfully, there is enough comedy present to make it all fairly worthwhile, though a little fright is what most would expect with a title like Revenge of the Zombies. it is only with the final scene that the movie redeems itself, but a little more of that would have went a long way into making this a 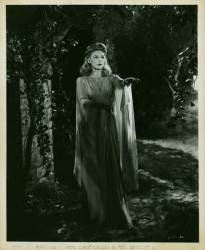 The only real problem with this movie though not really a problem per se, aside from the lack of scares, is the fact that it is essentially a retread of King of the Zombies, albeit a few tweaks here and there. The characters with the exception of Moreland are all new, but the situation is pretty much the same and it removes a little bit of the mystery out of it all. Despite all of that and though it might sound off-putting, because it is loosely tied together by Moreland and the man being as good an actor as he is, the movie still ends up being highly entertaining and even winds up being a worthy sequel.

Revenge of the Zombies, with its old-fashioned, voodoo-ish like walking dead and lighthearted story is a movie that may not frighten one in the slightest, but it will provide more than a few laughs and sometimes that is all that one really needs.