Memories Involving… – The Perfume of the Lady in Black (1974) 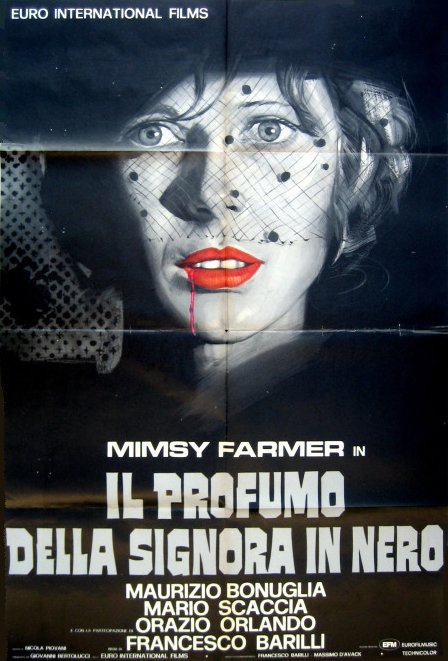 The Perfume of the Lady in Black from director Francesco Barilli is a bit of a surreal watch, and some might even say confusing. As long as one pays attention to the film, it is a pretty straight-forward affair, but it is all a bit colourful to say the least. Mimsy Farmer plays the lead character named Sylvia who, for whatever reason, starts to go mad – having hallucinations that date back to her past that also include conversations with her younger self. These actions only serve to make her current day-to-day life quite impossible and soon enough, these visions start to become more and

more powerful until they leave her with but one thing to do.

Barilli does quite an excellent job with the film, having a very good eye as to how a scene goes together. There are moments where you might seem lost, especially when Sylvia first starts to have these hallucinations, but it soon becomes quite apparent as to what is happening. The lines between reality and fantasy are soon blurred and Sylvia has trouble functioning in any sort of meaningful way after a while. Making matters worse is Roberto as played by Maurizio Bonuglia, who is quite creepy and always seems to have some sort of ulterior motive for Sylvia, aside from sleeping with her that is. More than anything else, this movie is more of a psychological horror, as the trauma of Sylvia’s childhood comes back to haunt her. Farmer does a fantastic job as the scarred Sylvia, a woman who is tortured by the death of her mother, of which she had a part, and her performance is not only believable, but tragic as well.  All of that finally leads to the end of the picture where the viewer gets a surprise and a little bit of gore as well.

crawl, making the film seem a little longer than it should be, but it is a minor thing compared to the whole of it all. The cinematography is dazzling at times to which Mario Masini should be given as much credit as Barilli and the music by Nicola Piovani really ties the film together and makes it all that much better. There is a lot to love in this film if given a chance, including a group of cannibals of all things in a very Rosemary’s Baby-type of way and it leaves you wondering what else Barilli could have thrown in here to make it even better than it was.

For those thinking this film might be an everyday sort of giallo, they might be a little disappointed. In fact, it would be hard to really classify The Perfume of the Lady in Black as such, being more of a horror than anything else. No matter where it may be slotted though, it is an entertaining picture that will make you think and maybe want to watch again once it is all said and done.